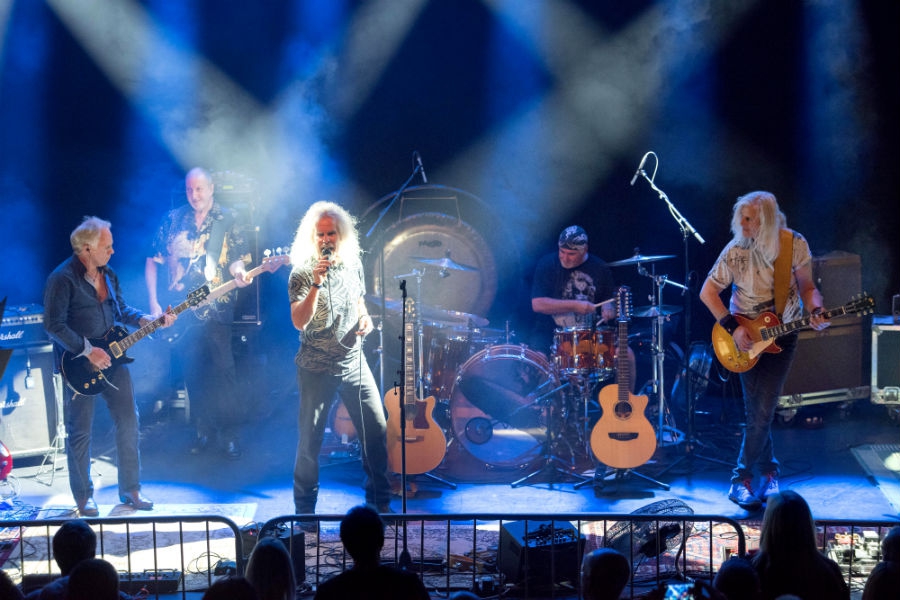 The band on stage

IN 1996 a band called No Quarter decided that they wanted to bring the sound of the Led Zeppelin albums to the stage and became Whole Lotta Led.

This is not a tribute but a bunch of five highly professional musicians who don’t wear wigs or pretend that they look like Zeppelin but just perform a variety of different songs, reproducing the Zeppelin sound to the best of their ability.

The line-up consists of vocalist Lee, guitarist Nick, bass player Geoff, drummer Charlie together with keyboard player and second guitarist Martin which means that they can reproduce many of the earliest numbers which were originally augmented on vinyl with overdubs.

This is a band that is playing at least one major gig a week and they normally choose one of the albums to play in full or even one of the most famous Zeppelin gigs and deliver all of the numbers from that to a welcoming audience.

The longest gig that they have ever performed lasted four and a half hours but for their upcoming Estepona Bull Ring visit, they will probably have a 90 minute slot and will make sure that all of the most popular and requested numbers are to the fore.

This a big show which needs a lorry to carry around the huge drum kit and up to 15 different guitars, amplifiers and speakers so it is going to be a slightly stripped down band travelling to Spain but spokesman Lee is confident that they will be able to deliver a superb performance.

“This is our first gig in Spain and we are very excited about it” he told EWN “hopefully it will lead to further visits. We are delighted to be part of this venture, especially as we also love the music of Deeper Purple and Think Floyd who we will be performing alongside.”

To learn more about the band visit www.wholelottaled.co.uk.

If you yearn to hear live versions of Kashmir, Stairway to Heaven, Black Dog, Whole Lotta Love, Immigrant Song and many more, then visit the Pink Purple Zep Fest at Estepona Bull Ring on August 26 starting with doors opening at 7.30pm.

Entry costs €25 and VIP tickets which are selling out quickly cost €70 so buy your tickets by calling 674 909 220 or visit the festival website at www.pinkpurplezepfest.com.