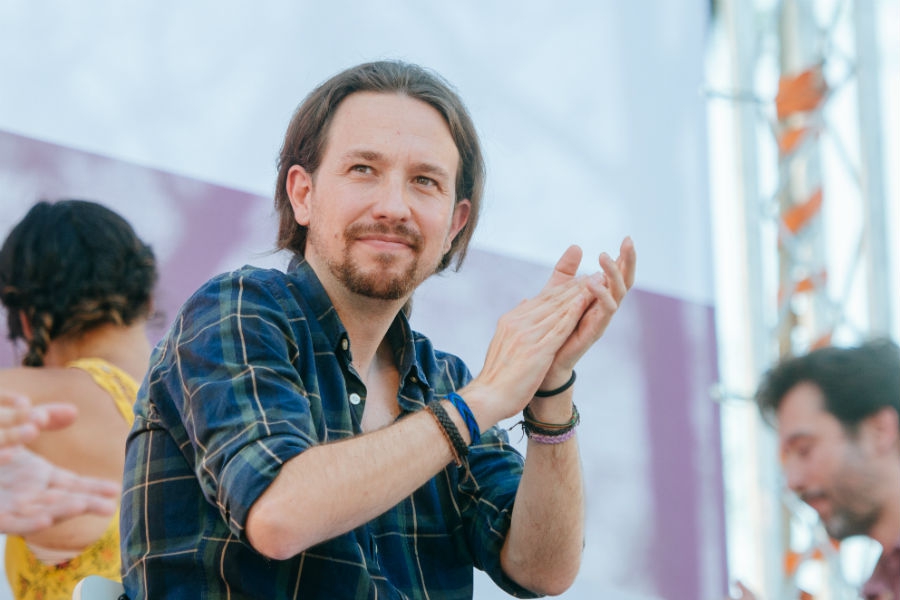 SPEAKING UP: Pablo Iglesias speaks out about situation in Venezuela.

In a general election the PSOE would take 24.9 per cent of the vote, 2.2 percentage points more than its worst-ever June 2016 results.

The Partido Popular (PP) would still come first as the most-voted party with 28.8 per cent but Mariano Rajoy and his followers have lost four percentage points since the last ballot.

After months of conflict, PSOE secretary general Pedro Sanchez appears to be putting the party together instead of pulling it apart. Or is it the Lone Ranger effect?

Everyone enjoys a western where the shunned idealist is run out of town, as Sanchez was last October. And they like it even more when the rejected hero returns with all guns blazing and wins the shootout the way that Sanchez did in last May’s primaries.

CONTRARY to the insistence of the popular anti-EU media in the UK, interminable queues at El Prat airport in Barcelona did not stem from animosity towards British Brexiteers.

Security personnel were taking industrial action for the usual reasons of wanting better pay and improved conditions and not only Britons took hours to get through passport control.

Naturally the region’s pro-secession faction had to put their oar in too, descending en masse and distributing leaflets which promised that the airports would be better run once Cataluña disconnected from Spain after the October 1 referendum.

More than one English-speaker must have reflected that this would have been as good a time as any to change the airport’s name to Los Prats.

Biting the hand that feeds them

Before imposing their own caliphate they believe they can further their cause by attacking tourist buses and bewildered visitors on hired bicycles.

Tourism destroys neighbourhoods they claim, happily biting the hand that feeds them and the three regions concerned.

Notoriously close to, and supported by the CUP party, they are doing a better job than Mariano Rajoy and the Spanish government at persuading Cataluña of the benefits of remaining within the Spanish fold.

Independence run by hooligans? Exactly what nationalistic but materialistic Catalans will run a mile from.

BALTASAR GARZON is an unfairlyjudged judge barred from practising. Gaspar Llamazares, who once led Izquierda Unida, is now its spokesman in Asturias.

Together they have registered their political platform, Actua, as a party and all they need now is Melchor for a Three Kings occasion.

‘All the world’s a stage’

PABLO IGLESIAS, erstwhile adviser to the late Venezuelan president Hugo Chavez and his successor Nicolas Maduro, finally referred to the situation there which is deteriorating – or escalating – into Civil War.

Still no outright condemnation of Maduro, who preaches but does not practise democracy, and Podemos leader Iglesias hardly busted a gut to get his message across as he did it on Facebook.

But anything is better than nothing and Iglesias wrote that Chavistas and the government’s opponents need to accept that they are condemned to live together and must make pacts.

Venezuela cannot solve its problems without agreement between the “different political actors,” he said. Typical that Iglesias should see politicians as actors.