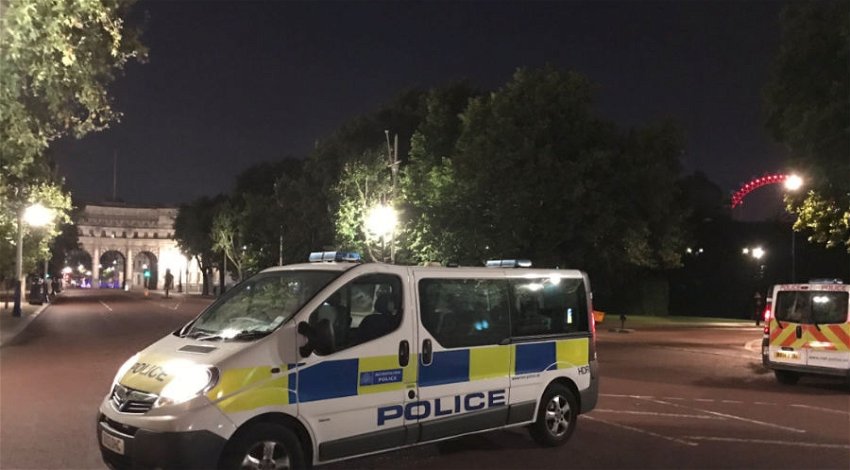 KNIFE ATTACK Police locked down Palace area after the incident

BUCKINGHAM Palace was placed on lockdown last night after a man armed with a knife reportedly attacked two police officers.

The assailant, believed to be in his mid-20s, was disarmed and arrested by two male officers stationed at the Mall at 8.35pm on Friday evening (August 25).

Armed police and emergency vehicles surrounded the Palace into the early hours.

Metropolitan Police released a statement a few hours after the incident, saying it was too early to tell whether it was terrorism-related.

“The man, believed to be aged in his early twenties, stopped his car near a police vehicle outside the Mall roundabout,” the Met statement said.

“Officers at the Mall spotted a large knife in his vehicle and went to arrest him. During the course of detaining the man, two male police officers suffered minor injuries to their arm.”

Both officers were treated by paramedics and then taken to hospital for further care. The Queen was not in Buckingham Palace at the time of the incident, police confirmed.

Witness Kiana Williamson told the Press Association what she saw.

“They were trying to get the man out of the car, shouting, more police were arriving on to the scene and the man was fighting back. I saw one injured policeman with an injury to his arm, although it didn’t look severe. He was being tended to by another officer.

There were early social media accounts from witnesses claiming that the man was armed with a sword. Police would only confirm that the weapon was a large knife.

Just 15 minutes earlier on Friday evening a man was shot and killed in Brussels by army officers after trying to stab two soldiers with a knife.

Police are treating the attack as a terrorist action. Neither soldier was injured. Witnesses said the man, aged 30, shouted “Allahu Akbar” before launching the assault.