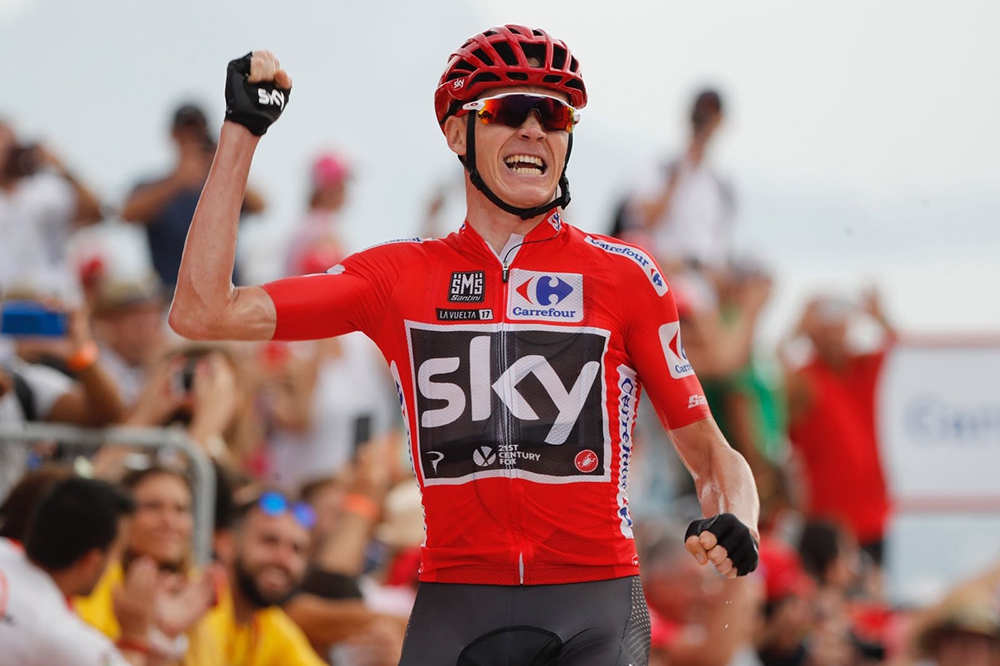 CHEERED on by  expats Team Sky’s  Chris Froome  made the most of yesterday’s stage nine steep finish on the Costa Blanca to claim the victory at La Cumbre del Sol.

Froome took the lead with about 500 metres to go and held on to win the 174 kilometre (108 mile) stage from Orihuela to El Poble Nou de Benitatxell four seconds ahead of Esteban Chaves (Orica-Scott), who now trails by 36 seconds in the general classification.

It took 20km of hard racing for 10 of the 181 riders still in the race to build a one minute lead over the peloton. Markel Irizar (Trek-Segafredo), Marc Soler (Movistar), Marco Haller (Katusha-Alpecin), Bert-Jan Lindeman (LottoNL-Jumbo), Tobias Ludvigsson (FDJ), Anthony Turgis (Cofidis), Lluis Mas and Diego Rubio (Caja Rural-Seguros RGA), Conor Dunne (Aqua Blue Sport) and Ricardo Vilela (Manzana Postobon) were then set to spend most of the day at the front. But Cannondale-Drapac didn’t give them much breathing room as the gap never got higher than 3 minutes.

Marc Soler (Movistar) and Tobias Ludvigsson (FDJ) enjoyed the first climb up the alto de Puig Llorença to get rid of the rest of their breakaway companions. At the top, the Cannondale-led peloton was only 1’50” behind them. The chasers were swallowed on the downhill and the gap with the front of the race went down to one minute as the race entered the last 25km. The leading duo was finally caught with 6km to go and Team Sky took matters into their own hands.

Mikel Nieve (Team Sky) controlled attacks from Romain Bardet (AG2R-La Mondiale) and Richard Carapaz (Movistar) in the last climb. Then his leader Chris Froome (Team Sky) accelerated with 500m to go and held off Esteban Chaves (Orica-Scott) to tighten his grip on the red jersey on the eve of the rest day.

The race resumes on Tuesday, 29 August with a 164.8km stage from Caravaca Año Jubilar 2017 / ElPozo Alimentación and culminates in Madrid on Sunday 10 September to bring the 72nd edition of the Vuelta to a close.