Appeal steps up a gear for photographer paralysed in bike crash 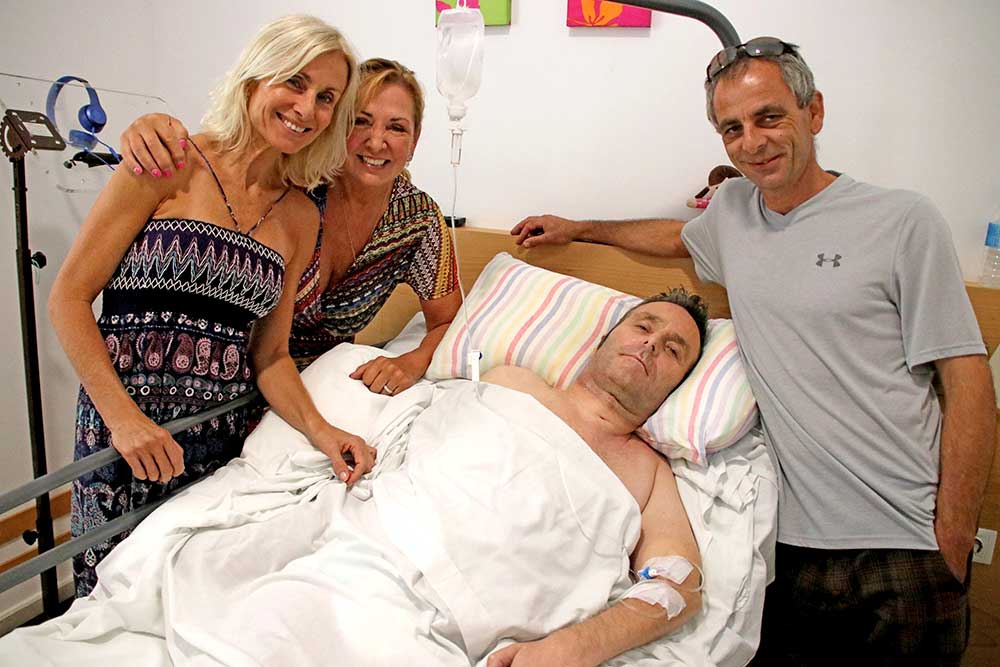 ROAD TO RECOVERY: From left: Lori, Sharon, David and brother Keith in Granada

AN EXPAT photographer totally paralysed in an horrific Costa del Sol motorbike accident has made another important step on the slow road to recovery.

David Toms, aged 52, has now been transferred from a specialist spinal injuries hospital  in Toledo to a  residential facility in Granada.

Despite an exhausting five-hour ambulance journey that left him weak and fighting a severe infection, his spirits remain high.

But the ongoing battle to improve David´s daily life by his family and support group needs to step up another gear so that they can help meet the €1,200 a month shortfall to pay for continuing care in Granada.

David, who quickly built a reputation for his wedding, portraiture, architectural and food photography after moving to Marbella from the UK around 15 years ago, suffered his life-changing injuries in July 2016.

Since then his parents, Brian and Judy who live in the UK , have spent their life savings on trips to Spain to care for him.

And David´s younger brother, Keith, has also been at his side for much of the time, although he shortly has to return to the US where he lives because of work commitments.

Close friends Sharon McAulay, a photographer,  and yoga studio owner Lori Sjollema, have also been there to support the family.

David’s transfer to Granada is one step closer to his hopes of living a more independent life in a specially-converted apartment near the beach in the Marbella or San Pedro area.

He and his family  hope that now he is in Granada more friends will visit now that he is just two-hours from the coast.

The ASPAYM   residence in Calle Bérchules, Granada has 60 other residents with various mental and physical disabilities.

None speak English, and David’s Spanish is only limited, but frequent visits and interaction will help keep him motivated. Visiting hours are from 11.30am to 1pm and 5pm to 8pm and fit around David’s daily physiotherapy needs.

DAVID TOMS fell in love with Spain around 15 years ago when visiting for a stag party with friends.

He eventually settled in Marbella, drawn by the scenery, the quality of life and above all, the gorgeous light.

David´s reputation as a professional photographer quickly extended throughout Europe and further afield as he worked for some of the biggest names on the Costa in addition to global clients.

But his career behind the lens stopped in an instant on the morning of July 15, 2016 when he lost control of his Honda Fireblade on a patch of sand spilt on the  Istan road.

A very experienced biker who knew the road well, David was hit by an oncoming car and sustained severe spinal injuries. He says he was not going fast.

Initially rushed to the Costa del Sol hospital, several days later he was moved to the Carlos Haya regional hospital in Malaga where he was given the devastating news that he would never regain any movement from the shoulders down.

But his family and friends knew the photographer with steel-blue eyes and a big ego was a fighter.

Once transferred to the specialist spinal injuries unit in Toledo, his determination has led to impressive results, including some movement in his lower left arm and left leg.

This means David can now scoot around in a specially-adapted electric wheelchair.

Though realistic that he is professionally unlikely to pick up a camera again – although he has said he would love to ‘play’ with one – he hopes he might be able to pass on skills to students.

The David Toms Support Fund plans to continue to organise events to raise money needed for his ongoing care on a monthly basis, and are appreciative for all the wonderful help and support – psychological, emotional and financial – from many sources.

Donations can be made on David’s personal gofundme page: www.gofundme.com/2s7mrahs

To follow his progress and for details of fund raising events see: his social media page: www.facebook.com/Davidtomsprofessionalphotography