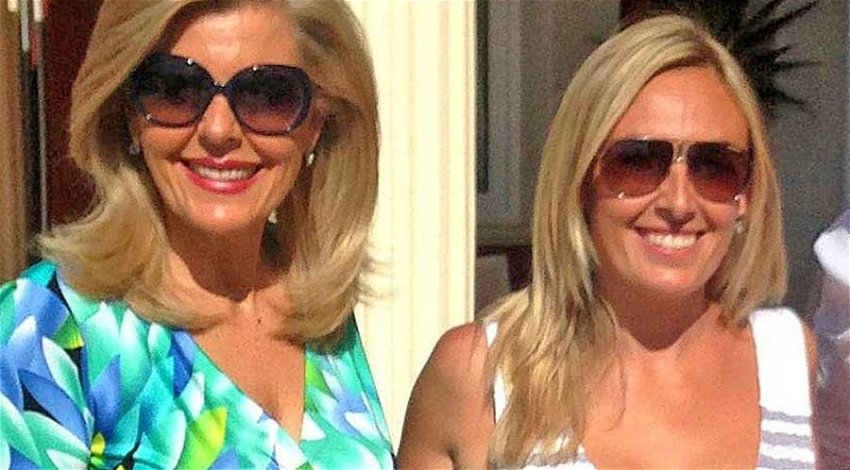 Debbie Cameron, 59, and her heavily-pregnant daughter Laura Joyce, 28, were taken into custody but Mrs Cameron has since been released.

Computers and documents were seized in raids on properties and businesses on the holiday island.

Five other people, whose nationalities are not known, were also said to have been detained.

Sources quoted in the Spanish media claimed that the women were suspected of being ringleaders in the alleged  fraud, which involves deploying touts at hotels to encourage holidaymakers into faking food poisoning illnesses in return for compensation.

Debbie Cameron is a well-known figure on the island and runs a website called ‘Rich Mum’ that has the tagline ‘Have Fun. Make Money. Do Good’. She describes herself as ‘being a mission-driven serial entrepreneur’.

She goes on to say, “For me life is about having fun, doing good and making multiple income streams together with my 3 fabulous entrepreneurial kids and their spouses who have given me 4 gorgeous grand kids. We work very closely as a family and play even harder at reaching out for our dreams and goals together.”

Mrs Cameron’s brother Gary Grimstead told The Telegraph: “Debbie says 100 per cent she hasn’t done anything wrong and it’s all a confusion. She’s back at home and is OK. They arrested her and then let her go. They [the police] have given her her passport back and apologised.

“But my niece is still in custody and all my sister wants to do is get her daughter out. It’s total confusion. All we are now concerned about is Laura. She is due [to give birth] in the next month.”

Mrs Joyce had earlier denied involvement after she was linked to the investigation in the Mallorca press.

A leaked police document reported by the Diario de Mallorca said that a car registered to one of her companies had been used by individuals who visited local hotels to recruit tourists for fraudulent claims.

Mrs Joyce’s husband Stuart, who runs and owns abar on the island, said, “I have nothing to say.”