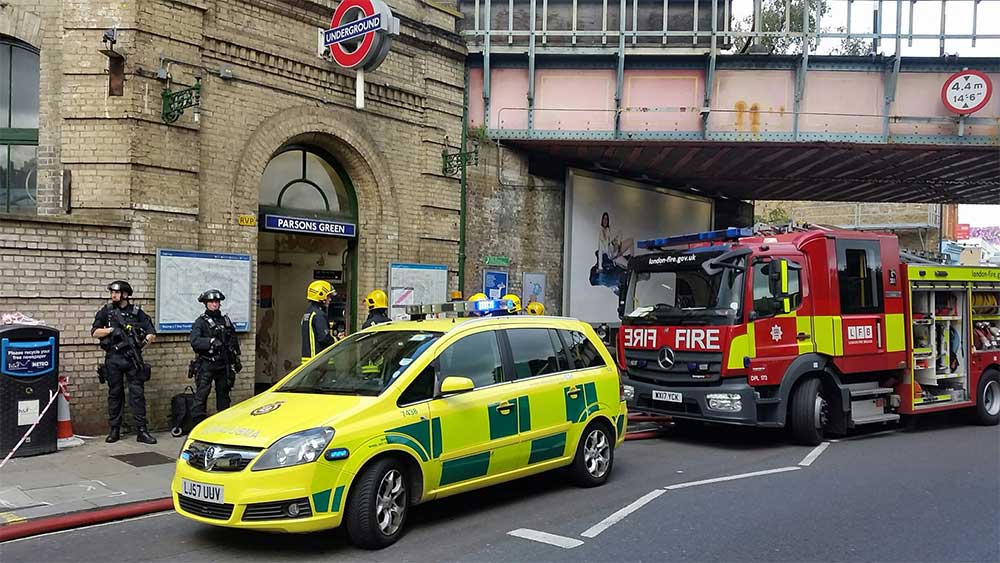 EMERGENCY services are at the scene of an explosion on a London Underground train at Parson’s Green on the District Line.

Witnesses at the scene report that some people have suffered facial burns after a white container in a Lidl’s bag exploded towards the rear of the train. Wires can be seen coming from the container.

NHS England has confirmed there are 22 casualties being treated in four hospitals.

Natasha Wills, Assistant Director of Operations at London Ambulance Service said, “We were called at 8:20am to reports of an incident at Parsons Green underground station.

“We have sent multiple resources to the scene including single responders in cars, ambulance crews, incident response officers and our hazardous area response team, with the first of our medics arriving in under five minutes.

Metropolitan Police Assistant Commissioner Mark Rowley, from the head of national counter-terrorism policing, said, “There are many urgent inquiries ongoing with hundreds of detectives involved, looking at CCTV, carrying out forensic work and speaking to witnesses.

“I am appealing for anyone who has information that would assist detectives to contact the hotline on 0800 789 321. I would also urge anyone with images or moving footage from the scene to upload them at www.ukpoliceimageappeal.co.uk

“Today and over the weekend the public can expect to see a heightened police presence, particularly in crowded places and at transport hubs.

“As always we urge the public to remain calm but alert; if they have any concerns, see or hear anything suspicious then please contact the police on the confidential hotline 0800 789 321. In an emergency always call 999.”

The station remains cordoned off and people are being advised to avoid the area.

“As London has proven again and again, we will never be intimidated or defeated by terrorism.I am in close contact with the Metropolitan Police Service, Transport for London, Government and other emergency services who are responding at the scene and leading the investigation. I will be attending the emergency COBRA meeting in Whitehall this afternoon with the Prime Minister.

“My sincere gratitude goes to all our courageous emergency responders and the TfL staff who were first on the scene.”

A TfL spokeswoman said, “The District Line has been suspended between Earls Court and Wimbledon due to a security alert.”

“Customers travelling between Wimbledon and Earl’s Court are advised to use alternative routes.”

Another attack in London by a loser terrorist.These are sick and demented people who were in the sights of Scotland Yard. Must be proactive!

We ask everyone to remain vigilant and to report any suspicious behaviour to us by texting 61016 or calling 0800 405040.