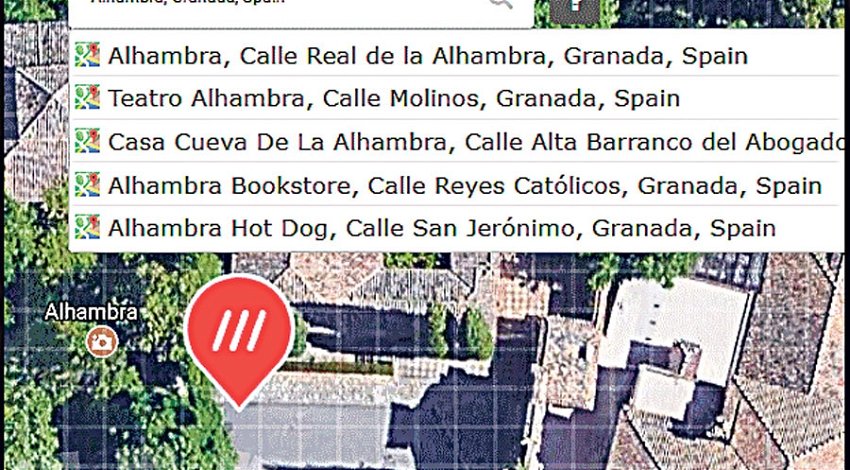 In this new weekly series, TERENCE KENNEDY tackles technology for the timid, from fears about banking online, to the world’s leading messaging service that sounds like a Bugs Bunny catchphrase

LET’S kick off our technotherapy with a new and amazing innovation which has the power to reduce every single address in the world to just three words.

Imagine: no more tedious directions to people about turning third right, second left, mind the T-junction and take away the Calle you first thought of.

Now all you have to do 2017-style is say three little words and Bob’s your tio. Let’s take a for-instance: imagine we want to meet in a quiet corner of the Alhambra, far from the madding crowds.

No need for complicated directions. Our Granada rendezvous is simply: opinion.workshop.engaging.

Child’s play if you’ve got a smartphone. (You don’t? Well, that’s fodder for another column). Or shall we meet on an oasis corner in Tamanrasset in mid-Sahara instead (welcome to my mid-life crisis…)?

That’s easy: recap.watching.unpacked. Or precisely above the sunken Titanic’s bridge and don’t forget your water-wings: speeder.seabeds.towpath.

The secret is a concept so simple it’s astonishing no-one thought of it before: the what3words app. It’s free to the common man, and is even being adopted officially by countries which have never been able to define physical addresses.

First up, Mongolia is blazing the trail and no yurt has now been left unaddressed. Some 75 per cent of the world apparently has inadequate addressing systems.

So a few distressingly smart young (British!) whizzkids worked out that you could define every single three-squaremetre block on the planet in just three English words, whether in a busy city or the middle of a desert or ocean.

Simply enter those three words into the free app and you’re shown /exactly/ where to go, no matter where it is in the world, with three-metre accuracy.

And it’s idiot-proof, promise. If you can use a smartphone you can use what3words. Technophiles will of course sneer and insist we all delve into the bowels of our satnav devices to work out complicated GPS coordinates, and good luck getting many pensioners, and in reality the majority of non-Millennials to go that route.

So take up thy smartphone, download the free app from the Apple Store (for iPhones and iPads) or Google Play (for Android devices) by searching for what3words, (or on your computer head to what3words.com), and start by finding out just which three words could get a stalker delivered directly to your front door.

It’s a brilliant solution for the technically timid which is now expanding beyond the 40,000 words of English it needs to cover the globe.

There’s now a Spanish version, and others. What3words is stunning in its simplicity and a boon to everyone except, perhaps, dyslexics.

But hey, there are apps for that too. Watch this space…

• EWN columnist Terence Kennedy was struck early by the tech bug when he dissected his parents’ precious radiogram, which never worked again. He went on to write for and edit international technology publications while managing to stay on the sane side of geekdom during a journalistic career that saw him scribing, broadcasting and translating.