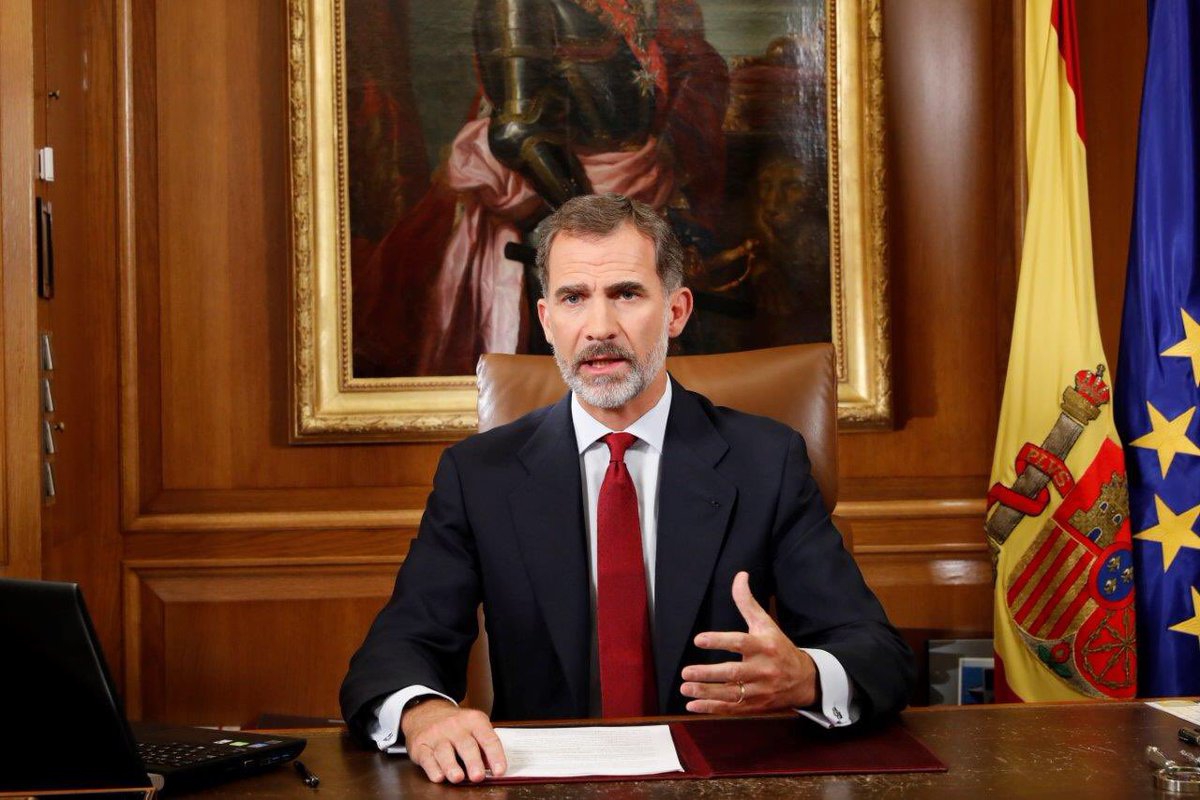 KING FELIPE’S address to the nation did little to reassure those outside Cataluña and nothing to influence the secessionists inside it.

His father Juan Carlos defused the attempted coup on the night of February 23 1981 not because he invoked the Constitution but because the military who rose up against the fledgling democracy obeyed their Capitan General, the leader of the Armed Forces, not the head of state.

The Catalan secessionists want a republic and the last person they are going to listen to is their well-meaning but unwanted monarch.

BRUSSELS got it in one:  “The referendum was illegal but there is no excuse for violence.”

However much they appeared to enjoy laying into would-voters and polling station volunteers, the police and the Guardia Civil were carrying out orders that come with the job description.

Those orders should never have been givenbut werea further example of Mariano Rajoy’s worn-out mono-strategy of converting a political issue into one that he and his government interpret as purely legal.

The referendum was illegal, the law that enabled it was illegal and the Disconnection law in the event of a “Leave vote” was illegal.

October 1 was illegal whichever way you looked at it, allowing Rajoy to wash his hands and leave it to the courts, the equivalent of the Attorney General, public prosecutors and finally, the PoliciaNacional and the Guardia Civil.

“We did what we had to,” Rajoyclaimed when he finally showed his face and spoke on the night of October 1.

Rajoy did not do what he should have done years back once it was obvious that the independence question would not solve itself.

Before October 1, poll after poll showed that the majority of Catalans were nationalists who wanted to remain Spain.

Following Rajoy’s recourse of reciting the law and nothing but the law while backing it up with force, how many feel that way today?

ITS illegality was never going to persuade CarlesPuigdemont& Co to abandon their referendum.

Spain’smisfortune is having a national president who has revealed himself as inept and totally lacking in emotional intelligence.

Cataluña is no better off with Puigdemont, as hyper as Rajoy is hypo.Puigdemont, speaking for the minority of secessionists, promises to lead Cataluña to the promised land of independence.

A land of milk of honey outside the European Union? Car manufacturers with fewer sales (Spain is their principal customer)? Catalan banks decamping to Madrid?

The Catalans willescape the shackles of Madrid only to find themselves restrained in a straitjacket of misery.

He made it to the Moncloa in November 2011 after an early election when Jose Luis Rodriguez Zapatero’s PSOE government, despite taking textbook Keynesian steps to cope with the economic crisis, could not tame it.

Rajoy, promising to wave a magic wand and return Spain to prosperity, got in with a huge majority that allowed him to govern by decree.

He and many of his supporters believe he was and is in the Moncloa on his own merits.  He initially arrived there by default and remains there after Podemos and Ciudanos split the vote in the 2015 and 2016 general elections.