Sometimes I really do lose the will to live 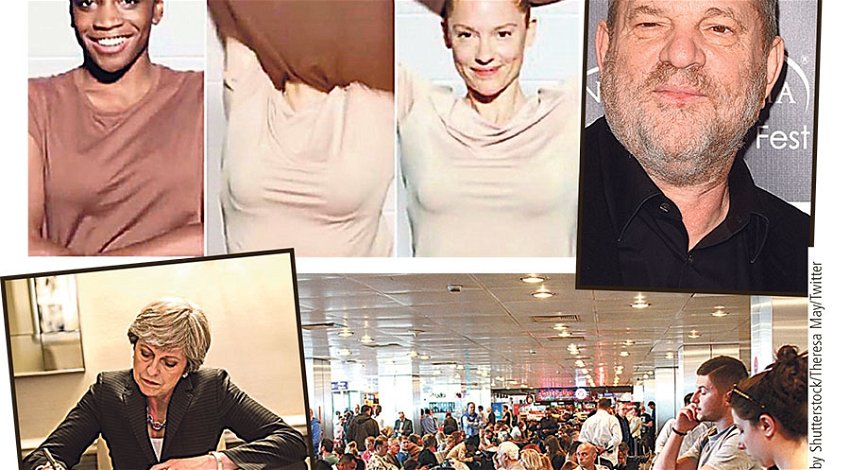 IN THE NEWS: Clockwise from top left; the controversial Dove advert, Harvey Weinstein, Theresa May, and French air traffic control.

HAVE you noticed that since the Weinstein revelations all those ‘actors’ have suddenly become actresses again? Funny that. Another thing I wondered, amidst all this hysterical sexual abuse furore, is just how many ‘actresses’ actually succumbed to the couch and did in fact get the part, if you’ll pardon the double entendre! Ah well, at least all those luvvies have once again reverted to gender. Thankful for small mercies I suppose.

Another example of reversed racism bull…t reared its pathetic, but dangerous head again this week. Namely the outcry that followed the Dove body wash advert that, amid grovelling apologies from the company was, to my mind, disgracefully withdrawn. It showed a series of women removing their sweaters and morphing into different races and ethnic origins. Dove had meant to show the product was aimed at a whole diversity of different cultures and skin colours. Wrong! Don’t be ridiculous, its racist innit!?  Sometimes I really do lose the will to live.

One thing that is becoming increasingly apparent during all these Brexit negotiations, is just how deeply entwined we have actually become with the EU. I’m surprised we didn’t have to go to them for permission to wipe our behinds. The sooner we tell them all to get on their bikes and take back our autonomy the better. Unfortunately, I’m afraid the simpering Ms May and her gang of incompetents are not the ones to do it. Come back Maggie all is forgiven.

I see the French air traffic controllers have taken their en masse annual vacations again. Bet they plan their trips by road and sea. Personally, I’d sack the lot of ‘em. Trouble is they’d have to be replaced by…. yep you’ve guessed it, more French air traffic controllers. Ah well, flying, or rather not flying, just wouldn’t be the same without them. It would however be a decent gesture to announce their intentions at the beginning of the year. At least we could then plan our own vacations around theirs!

Funny story emerged from Michael Portillo this week. Apparently, he was asked by a constituent to send her a signed photo. A week later he found she had left him a reminder in his office. Beneath her name was written ‘horse face.’ Portillo took this to be a self-depreciating joke. He subsequently popped a photo in the post, writing on it. ‘To my very dear horse face.’ Later his assistant asked if he had seen the note. ‘I thought you may not remember who it was, so I wrote ‘horse face’ on it to remind you.’