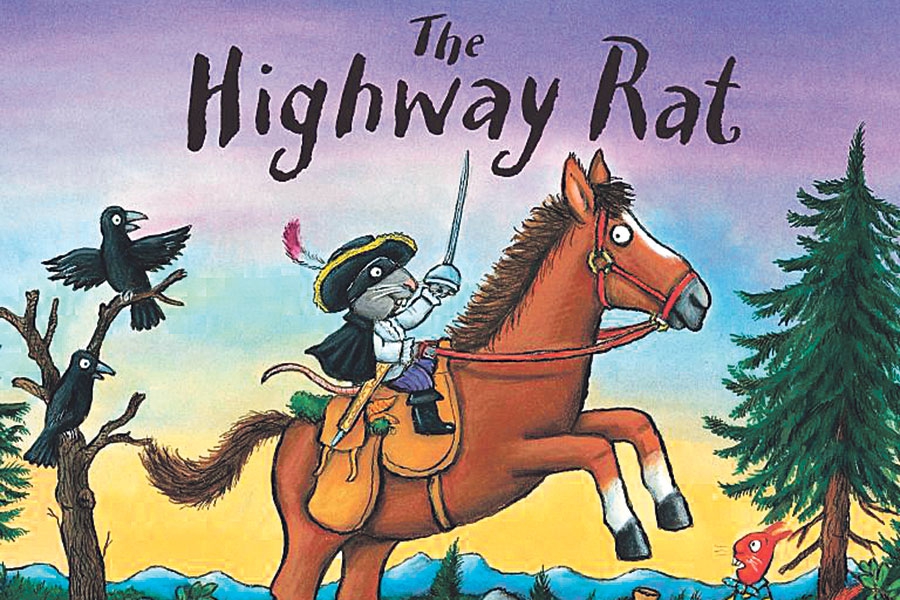 SO TO SQUEAK: David Tennant (inset) will voice the Highway Rat.

David Tennant has bagged his first festive TV role for this coming Christmas, and it’s so exciting we don’t even care that it’s only October. David will be voicing the one and only Highway Rat, from legendary children’s author Julia Donaldson’s book of (almost) the same name.

The half-hour animated special will see David voice the tricksy rat from the 2011 book alongside the likes of Rob Brydon, Nina Sosanya, Tom Hollander and Frances de le Tour. In case The Highway Rat isn’t on your reading list (and if not, why not?), we’ll give you an outline of its ‘swashbuckling tale.’

The Highway Rat is all about, well, a highway rat who’s always hungry and on the look-out for biscuits and delicious sweet treats. He’s just like us, basically, except he has fewer qualms about robbery. The children’s book follows the rat as he tears along the highway searching for snacks to steal until his sweet tooth ‘eads him to a sticky end.’

It appears we’ll have to wait until summer 2018 to get our third helping of Strike on BBC One. After The Silkworm wrapped up, the BBC announced that Tom Burke’s Cormoran Strike would return in 2018 with The Career of Evil, the third story based on JK Rowling’s bestselling crime novels written under the pseudonym Robert Galbraith.

Thanks to Deadline, we might have an airdate for that third outing as they’ve reported that Cinemax will air all three stories back-to-back in the US from June, meaning we’ll likely get The Career of Evil around the same time. Of course, this is just guesswork and we might get it earlier, but it’s unlikely that we’ll wait until after it’s aired in the US, so we reckon June at the latest.

If you would like me to answer any questions you may have on satellite TV or to expand on anything I have written about please call me on 678 332 815 or email [email protected] I look forward to your comments and questions.  Don’t forget to listen to my radio show every weekday from 10am on Spectrum 96.1 & 106.8FM, now covering almost 3,000sq kms of Costa Almeria and Calida or listen online at costaalmeria.spectrumfm.net.