Are we jumping into unknown dangers, feet first? 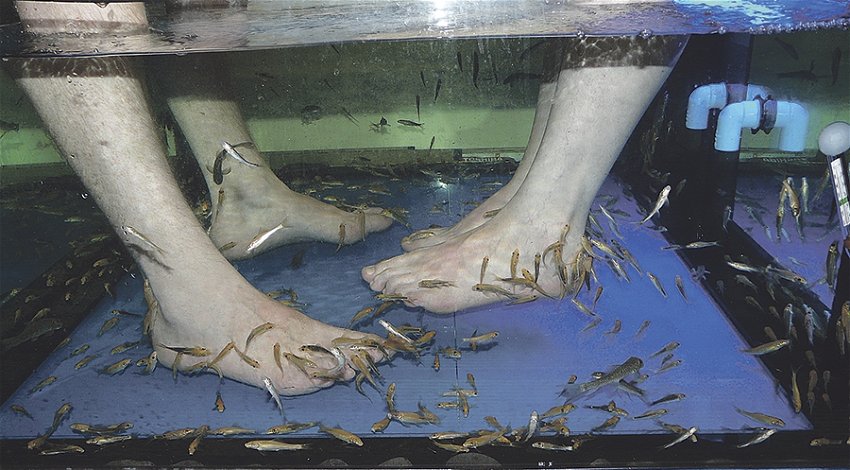 IT’S amazing how many things we do without considering the consequences.

Just last week it was brought to my attention that the iPhone actually informs us (although not in these actual words) that if you put the ‘phone to your head you’ll fry your brains, if you put it in your pocket you’ll nuke your nuts and so on.

I bought my kids those phones that are cooking them alive and yet never thought to take a moment to do my due diligence and find out what it was all about beforehand.

We’ve become like gullible children believing the ‘powers that be’ are looking after our well-being and that everything available is safe to use without further investigation.

About five years ago I first saw the fish tank spas. The idea comes across as quirky but natural; you sit with both feet dangling in an adapted fish tank and Garra rufa fish (a mini toothless carp) swarm around your feet and ankles feasting on your dead flesh.  Not something I could bear to do myself but certainly nothing I thought to worry about if I, or the children, did give this a try.

However the subject came up in conversation recently and I was taken aback to find out that many States in the USA have actually banned ‘doctor fish’ (as they’ve come to be known) as they can potentially transmit and spread infectious diseases.

Following up with a bit of reading online it would indeed seem this is a real concern, particularly as many of the fish spas can’t afford to maintain the degree of hygiene required or don’t think they need to.

I have often watched people ‘enjoying’ the fish spa experience but I must say I don’t recall witnessing a water change between each customer; the recommended practice for hygiene.

I don’t think I’ve seen the fish being replaced or treated between each use either.  Using the same fish with different clients apparently greatly increases your chance of catching something nasty from the last person.

General recommendations include waiting at least 24 hours after waxing or shaving legs before having a fish pedicure as any open wound is subject to water bacteria as well as fish transmitted infections.

We also need to watch out for the more economical Chin Chin being passed off for Garra rufa.  This similar species grows teeth after just a few months, meaning that blood can be drawn and the risks to our health even greater, putting the HIV infection and Hepatitis C on the list of concerns.

It is also understood that in order for the fish to be ready to snack away on our feet they need to be very hungry, which is obviously cruel to the fish.

I for one have to admit I feel a bit overwhelmed at all the unknowns that confront us with such disparity; hopefully like with these fish, I won’t necessarily always jump in feet first!