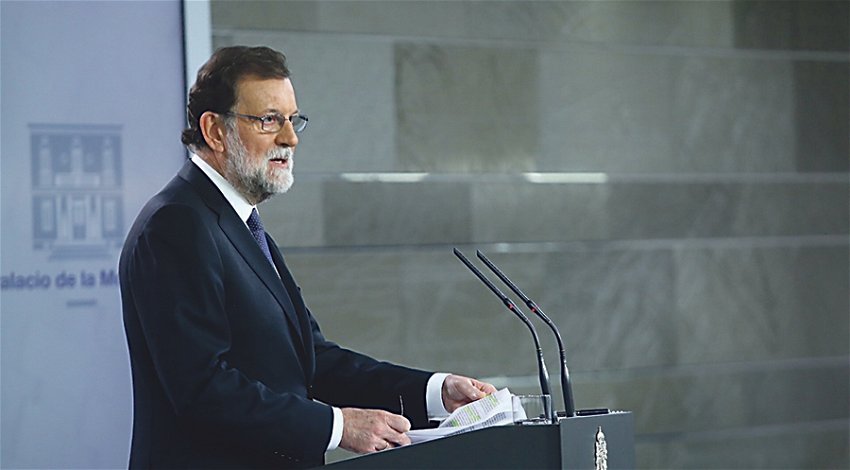 AS usual Spain takes a beating in the European press.

Despite applying the Constitution’s Article 155 and booting out the Catalan president and his government, Spain’s president Mariano Rajoy emphasised that Cataluña’s autonomy had not been removed.

The region would not be governed from Madrid and there would be elections within six months.

So the next morning the Observer observed that Cataluña had been stripped of its autonomy and would be governed from Madrid.

The Mail on Sunday showed thousands with placards calling for Freedom without explaining that they demanded the release of recently- remanded Jordi Cuixart and Jordi Sanchez, the leaders of two pro-secession associations.

Rajoy has a gift for striking wrong notes and words like ‘disobedience’ don’t sound good in translation.  But this time it was just what most Spaniards wanted to hear.

CODORNIU has moved its registered head office to Haro in La Rioja. Freixenet is waiting until the end of this month before making up its mind.

Freixenet boss Jose Luis Bonet wasn’t too bothered.  Sales on one side have increased, he said, dismissing the falls as irrelevant.

Meanwhile Christmas, the cava season, is coming and old habits die hard, so it’s a given the names on the bottles will still belong to Codorniu and Freixenet.  But when glasses are raised in the Palacio de la Generalitat Catalana, who will be holding them?

It doesn’t add up

MISTAKES have been made in Madrid, especially since 2012 when former regional president Artur Mas started believing his own independence fantasies.

But Carles Puigdemont makes graver errors with his stirring to-the-barricades addresses.  He refers to Catalans and Cataluña, bemoaning a Madrid-enforced end to democracy.

But Puigdemont speaks for the Junts pel Si coalition shared between his own PDeCat and the ERC which is shored by the CUP.

Between them they have a majority of seats in the Parlament, but not voters on the street.  And the majority who did not vote for them are those who most fear an end to democracy.

ON October 12, Spain’s National Day, when all was closed, 80 town halls remained open in Cataluña.

Such dedication to independence!  Civil servants and municipal employees are as envied as they are criticised for their cushy jobs and working on a national holiday is uncharacteristic.

Admitted, it was more a question of opening their doors in most town halls, rather than attending the public.  Business as usual in other words.