Now is the printer of our discontent 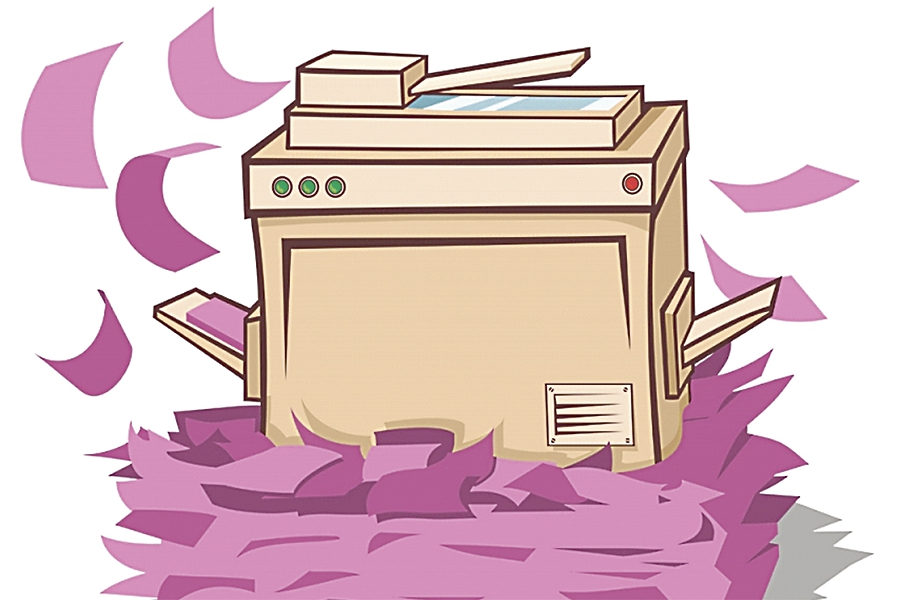 PRINTERS: What happened to the paperless society?

TERENCE KENNEDY shares his love-hate relationship with the most treacherous of computer devices, the printer.

EVER wondered why your printer won’t let you produce a black and white document because it’s ‘out of magenta ink’?

Is it a good idea to let your printer know you’re in a hurry, because it can smell the fear?

And if we had a 3D printer, could we then print out our own 3D printers?

You’d think after more than three decades, Messrs Hewlett-Packard, Epson, Canon, Brother and co. could finally get it right – but ‘printer rage’ is now so common that an idle search on Google produces more than three million hits.

Paper jams, empty cartridges, upright A4 printed in landscape, worthy but misguided attempts to save the forests by printing double-sided: these are all facets of our troubled interactions with technology.

The irony is that not too long ago, pundits like me were confidently predicting the paperless society, yet today in the developed world we each consume an astonishing 200 kilos of paper a year. And in 15 years the planet’s paper consumption has actually grown 77 per cent.

As for the printers themselves, at the current rate they’ll soon be given away free with the cornflakes.

That’s because they use the Gillette business model, so-called from the days when that company sold the razor for next to nothing, but made its fortune on the blades we then had to buy for it (one of the reasons I stopped shaving; call it a matter of principle – but more probably sheer laziness).

I recall staying up all night years ago trying to persuade my clunky bubblejet to print a British pound symbol. Or wrestling with it for hours to produce an envelope despite my exasperated partner’s entreaties to ‘Just write the **** thing by hand!’

Now printers ‘simply work’, or they should, at a (hidden) price.

Despite printers being cheap and cheerful these days, ink in branded cartridges has become one of the most expensive liquids in the world: €1,500 a litre by my quick calculation.

You’d think as a result that we’d be more selective about what, and how much we print. Yet I had an older colleague who insisted on printing all his e-mails.

Until he saw reason, he was using an entire ream of paper (that’s 500 sheets to the stationery-challenged among us) every few days.

So next time you’re wondering whether to print, you could do worse than abide by the automatic signature I’ve had at the end of all my e-mails for years:

‘Please consider the environment before printing this e-mail. No trees were harmed in sending this message, but quite a few electrons were slightly inconvenienced.’

Lasers are the workhorses of the printing world: generally monochrome, more expensive to buy than inkjets but cheaper to run if you’re a serial printer.

Inkjets are cheap as chips – until you start buying the replacement ink cartridges. And they print ever so pretty in colour, at a price.

That’s a pain you can ease slightly by buying generic cartridges online or from your local shop, and despite the manufacturers’ quality warnings, I’ve never yet encountered one which printed any worse than the branded one, or which ‘ruined’ a printer.

(And don’t even think of refilling your cartridges by hand, as some of us used to do. Accompanied by frequent embarrassment when visitors would remark on the profusion of used syringes lying around the home…)