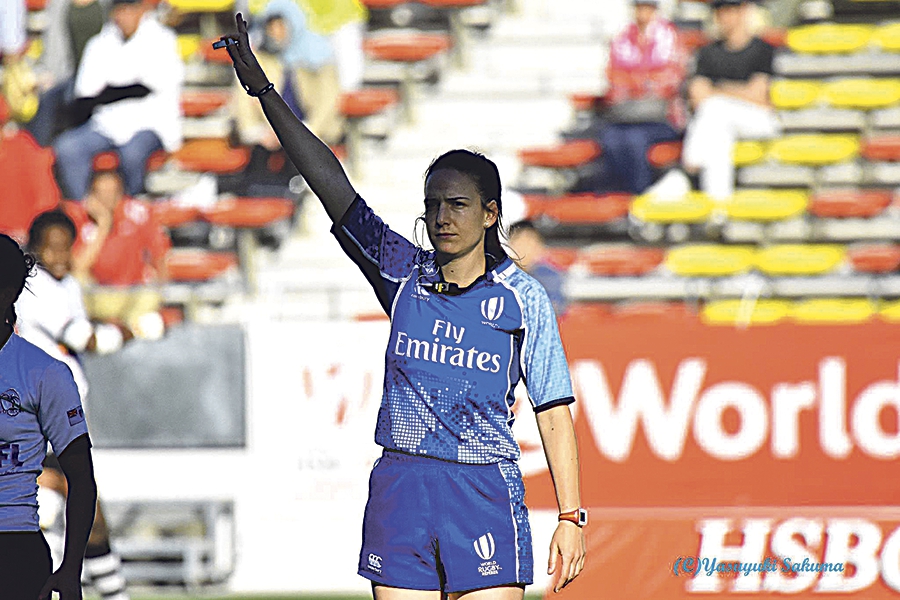 RUGBY is often described as a game of respect and discipline; terms that are undoubtedly personified by one Andalucian woman who recently made history in the sport, Alhambra Nievas.

In October, Nievas became the first woman to officiate a men’s Rugby International in Europe when she oversaw Finland defeat Norway 15-8 in the Rugby Europe Championship.

Despite this achievement, she remained modest and grounded over the course of our interview, with her dedication to the sport obvious throughout, epitomised by her choice to focus predominately on the match itself, rather than her personal accomplishment.

She said: “I feel very happy and motivated to take this new opportunity with both hands. It was a great challenge.

“It was a tight game that required a lot of focus.

“Players and staff from both teams had a positive spirit and it was very natural for us as the refereeing team.

“I hope that one day we don’t talk about the gender in the refereeing, we talk about work, development and performance.”

Compared to most, Nievas, originally from Granada, first found rugby at a reasonably late age. It was at the University of Malaga where she discovered her passion for the sport.

“I started playing at University when I was 19 years old. Some friends talked about the rugby team and I was very curious because I’d never heard about it, although I played lot of sports when I was a child.

“I fell in love in the first training session; the adrenaline, contact, skills. In rugby, you work as a team with one goal on the field.

“But rugby is more than sport, it’s a life philosophy because it gives you lots of values: respect, sportsmanship, equality, and solidarity.”

The 34-year-old went on to captain her University side and became a prominent figure in the Spanish National side later in her career, before eventually hanging up her playing boots for the whistle in 2012.

“When I started refereeing, I carried on playing for the first five years and my priority was being a player,” she said.

“Then when national opportunities came to referee at the men’s top division in Spain and also international appointments, I decided to stop.

“It was a tough decision because I love playing but I don’t regret it and I have a lot of support from my team, family and friends.”

Since embarking on her refereeing career, Nievas has continued to succeed.

She became the first female match official in a men’s test when she was assistant for USA against Tonga, and also refereed at the 2016 Olympic Games and the World Cup earlier this year.

But when asked on her favourite career moment so far, there was a standout choice.

“This moment was when my player and referee goals joined. It was an amazing experience.”

The pinnacle of her meteoric rise in the refereeing world came last year, when she was awarded the World Rugby Referee award, alongside South African Referee Rasta Rasivhenge.

On receiving the award, she said: “It was a big moment in my career. I can’t explain what I felt at that moment.

“It was very special considering all the work and commitment when I made the decision to start a professional career in refereeing.”

Women’s rugby is a sport that continues to grow with audiences around the world, with new opportunities for participation coming to fruition continuously.

This year’s World Cup Final between England and New Zealand reportedly hit peak viewing figures of 2.6 million on ITV but although there are obvious signs of improvement, Nievas admits there is still work to be done.

“It is getting better and better but we still have a way to go.

“We need to make a difference in some roles as coaches, referees, managers and responsibilities in the unions.

“The women’s game is growing fast, both 7s and 15s, but we still need more exposure and to develop in new countries with some resource problems.”

Finally, when asked about what the future holds for her, her response again reflected her character: humble, appreciative but driven to succeed.

“I keep my goals on the basis of learn, grow and enjoy the road,” she said.

“I think when you achieve them (goals), new challenges come, so I hope other new opportunities will come in the international stage and not only for myself, but for the new generation that now see a future being a referee.”