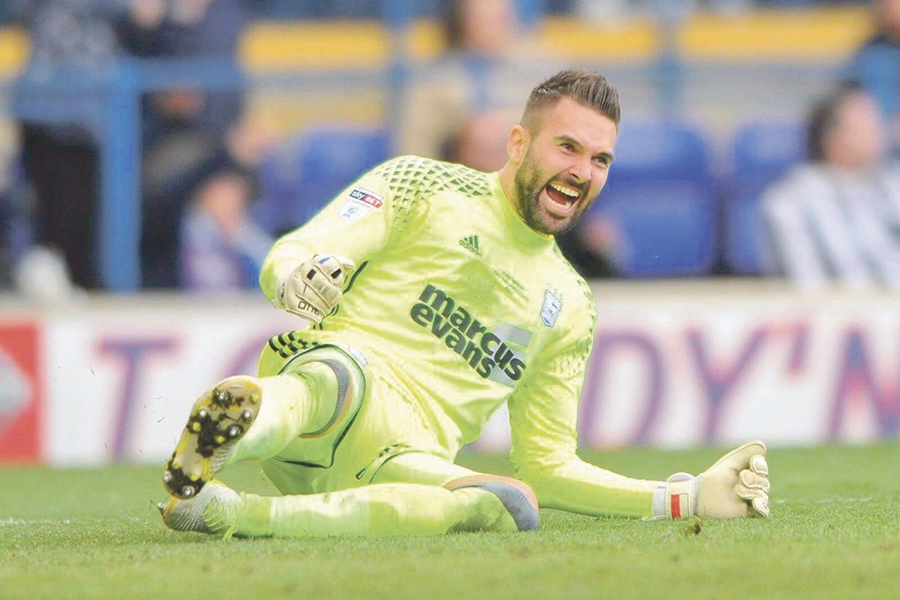 DAVID RAYA: Is set to return to FA cup action.

RIO Ferdinand’s decision to step into the boxing ring brought back memories of retired footballer octogenarian Peter Higham – who recalls scoring a goal – while wearing a boxing glove!

Ex-Nottingham Forest striker Higham, 86, found himself on the canvas in a derby clash against arch rivals Notts County in 1956, when he clattered a post, sustaining injuries.

“I got barged into the goalpost, sustaining a broken and dislocation of a finger, in a local derby against Notts County at Meadow Lane,” said Higham.

“Trainer Tommy Graham got a boxing glove – God knows where from – and got permission from the referee for me to wear it, to protect my finger,” said Higham.

“I remember the pain was excruciating. To this day, I can’t straighten my little finger,” said Higham.

Ex-Manchester United and England defender Ferdinand is bidding to become a professional at Cruiserweight after signing up to a lucrative deal with a bookmaker.

That led to criticism from boxers, including Tony Bellew, set for a December rematch with heavyweight David Haye, hitting out at Ferdinand: “He’s making a mockery. It’s not a game – it’s a serious sport – and can be very dangerous.

“It’s attention seeking of the highest order. Why does he need to go into a boxing ring? It stinks of desperation, not being able to let go out of the spotlight,” punched Bellew.

But Ferdinand hit back: “This is not a joke. Hopefully, I will get a licence, become a professional and fight someone.”

Ferdinand, awaiting a licence from the British Boxing Board of Control, said: “Boxing can’t be a gimmick. If I take it lightly, I will get hurt.”

Ferdinand, 38, plans one fight, having initially spoken about ambitions of challenging for a belt: “I want to see if I can get a licence – become a professional – and have one fight,” said Ferdinand.

Higham, who delivered a knock-out blow with a boxing glove in Forest’s top of the bill match against County 60 years ago, said: “I scored the third goal – I have the picture – with the boxing glove over my left hand!”

Conte or Mourinho to sparkle on Bonfire night

JOSE Mourinho and Antonio Conte are set to light up Bonfire night on November 5 – as Chelsea host Manchester United – in the Premier League at Stamford Bridge.

After leaving Real Madrid in 2013 Mourinho returned to Chelsea, winning the Premier League, only to be axed in December 2015, after a poor run of results.

Mourinho, appointed manager at Manchester United in May 2016, fired a rocket at his players after the shock defeat against newly-promoted Huddersfield Town in October.

City host Arsenal at The Etihad, in another Bonfire night spectacular, and Guardiola said: “We are going to lose games. Any team can beat us.”

Golf: Rose to bloom in Turkey

JUSTIN ROSE is hoping for a podium finish at the 2017 Turkish Airlines Open that takes place during November 2-5 at the Regnum Carya.

“I’m sure we’ll have another good tournament and hopefully another podium finish,” said 2013 US Open winner Rose.

Antalya hosts the Turkish Airlines Open for a fifth time in the first of three consecutive Rolex Series events which conclude the season-long Race to Dubai on the European Tour.

The 2014 US Open winner and former world number one Martin Kaymer will also feature in the Turkish Airlines Open, alongside Olympic medallists Rose, Henrik Stenson and Matt Kuchar.

From Barcelona to Blackburn

“I’ve been here since I was 16 and it feels like home,” said Raya, who signed a new extended contract at Lancashire League One club Rovers this year.

Raya, who has featured in five FA Cup ties since arriving in England as a teenager, joined Rovers Academy from Barcelona outfit UE Cornella in 2012.

“It feels great,” said Raya, 22, who signed professional forms in 2014, and has worked his way up to claim the number one jersey.

“It’s a chance to carry on at this great club,” said Raya, under former Celtic manager Tony Mowbray.

After four months’ loan at Southport in 2014, where Raya made 15 appearances in the Conference Premier, he returned, making his Rovers first team debut against Leeds United in 2015.

“Leeds was where I made my full debut and it couldn’t have gone any better, we won 3-0,” said Raya, whose previous three year deal was set to end in 2018.

Former Rovers Academy starlet Raya, who has agreed a one-year extension to his contract until 2019, said: “I’ve been here for five years.

“It’s given me a chance to grow up further as a footballer – and as a person – and I’m really pleased.”

It has been a hard grind for Raya, who was a cameo player in the first team in the 2015-16 season, having only been called upon after injury to first choice Jason Steele, at the tab end of last season.

“I hadn’t played as much as I would have liked, but football is like that. When I got my chance, I just needed to take it,” said Raya.

Rovers first team coach Mowbray, formerly in charge at Ipswich, Hibernian, West Brom, Celtic, Middlesbrough and Coventry, who was appointed in February, has given Raya his big chance this season.

“David Raya finished the 2016-17 season extremely strongly. He’s a very talented young guy – needed an opportunity – and we gave him one,” said Mowbray.

“I waited for my chance to show the new manager what I can do,” said Raya, called upon after Steele sustained an injury, after 82 consecutive league games.

“It was tough, but you get through it. Then, when you get your chance, you have to take it,” said Raya.

Raya remained unfazed during that spell, saying: “You have to keep yourself motivated – keep working hard – and do your best.”

Three years ago Raya was shipped out on loan to Southport and was a key figure in The Sandgrounders FA Cup run – progressing to the third round – before being knocked out by Derby County.

Rovers enter the first round of the FA Cup this weekend against Barnet, with a fixture in the EFL Trophy Northern Group C on November 7, prior to returning to a League One action against Walsall on November 11.

Blackburn, relegated from the Championship last season, are leading candidates to return to England’s second tier at the first attempt, a task in the hands of Raya.

“I’m still young, I’ve got a lot of years ahead of me. Hopefully I can repay all the support I’ve had from the club,” said Raya.

“I looked forward to this season after the summer holidays with my family, who I had not seen a lot of,” said Raya.

Ex-UE Cornella youth Raya said: “Blackburn gave me the chance to start my career. I want to stay for as long as possible. I’m very happy here.”