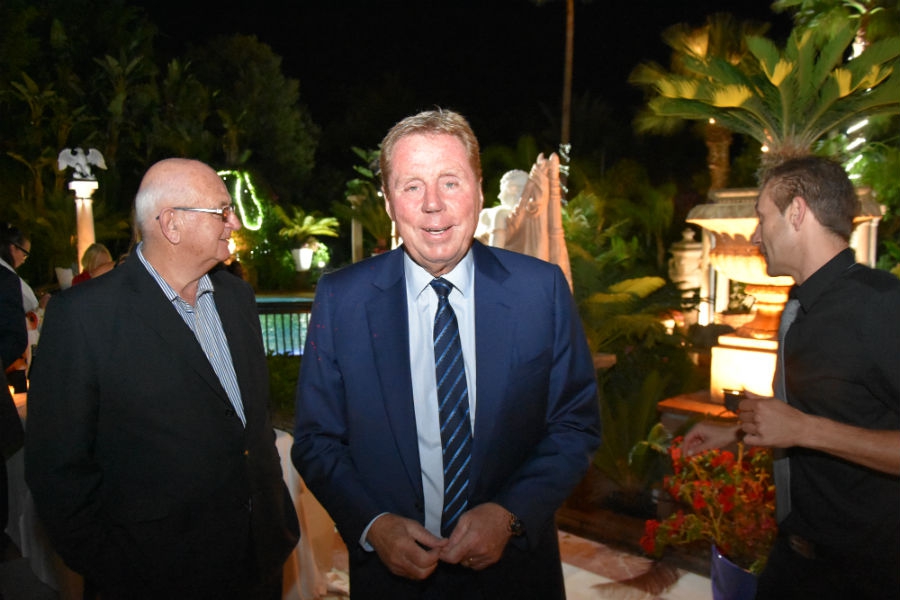 He kindly agreed to speak to the Euro Weekly News about his life in football and his commitment to support charity whenever he can.

He and his wife Sandra used to keep a holiday property in Estepona which is how they first got to know Sandro Morelli, owner of the Villa Tiberio restaurant, and he was delighted to come over to support his friend in raising funds for Cudeca Hospice and the Red Cross.

Unfortunately, Sandra was unable to accompany him on this lightning visit which saw Harry return to the UK on Monday as she has just had an operation to remove a disc from her spine.

It was in the lap of the gods as to whether Harry would be able to come to Spain for the charity evening, but happily Sandra is now on the mend and he was able to make it.

Harry Redknapp is a genuinely charming and cheerful man who has been an incredibly successful manager after retiring as a player in 1979 before going on to manage over 1,000 games.

When asked whether he had one particular football success of which he was particularly proud, he explained “I have enjoyed all of my time in football.

I took Bournemouth up from the fourth division, brought on a number of great international players whilst managing West Ham and had the pleasure of winning the FA Cup against the odds at Portsmouth.

“Then with Spurs I had a great time with some super players who are still doing well in the Premier Division.”

When asked if he felt any bitterness about the way in which managers are treated and can be sacked almost at a moment’s notice, he was remarkably sanguine, “It’s something we know and understand and having been involved in more than 1,500 matches as a manager, I consider it to be part of the job.”

At the age of 70, he doesn’t expect to return to high profile full time management although he does still give some advice to Yeovil Town and was for a short period of time the caretaker manager of the Jordan national team.

In a recent interview conducted by this writer with currently injured Birmingham City goalkeeper, David Stockdale who was Harry’s first purchase for the ‘Blues,’ the footballer said that he had nothing but praise for his management style but accepted that this was the way that football worked nowadays and success was everything.

Working occasionally with his son Mark, Harry is involved in building both social and commercial housing in the Dorset area and he is currently happy with his life in the exclusive area of Sandbanks (Poole) as he has little direct contact with those in the current world of football, preferring instead to enjoy life with Sandra and helping to raise funds for the Southampton-based charity Leukaemia Busters.

Harry Redknapp is a charming and pleasant man who has enjoyed some 50 years in football and has achieved a great deal in his long career.