FOR THE FALLEN: We will remember them… 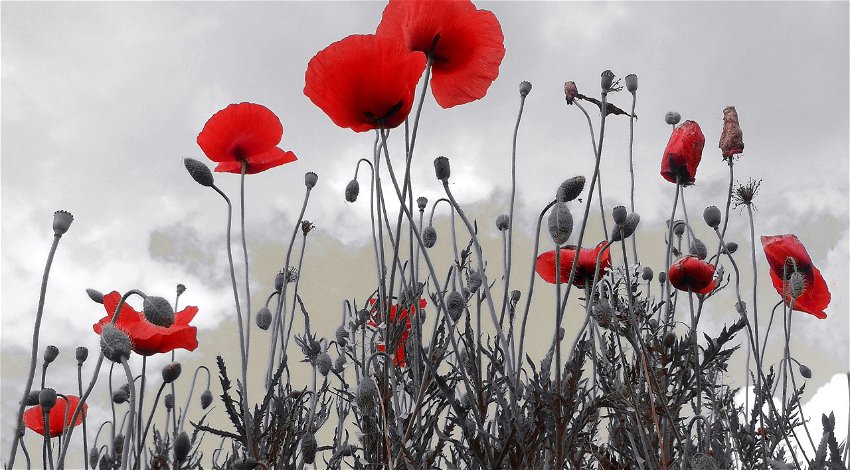 A two-minute silence is held at 11am.

The silence is acknowledged  around the UK and in other countries, such as Spain, where there are active Royal British Legion clubs who tradionally mark the event.

And, on Sunday, members of the Royal Family and the Government will attend National Service of Remembrance is held at The Cenotaph in Whitehall in London alongside representatives from the Armed Forces and the public.

What is Armistice Day and why is it remembered?

The day remembers the agreement between the Allies and Germany force on November 11, 1918, to stop fighting which marked victory for the Allies and defeat for Germany.

It was signed in Compiegne in Northern France and came into effect at 11am.

The armistice forced the Germans to evacuate invaded countries and territories within two weeks. They also had to surrender a significant amount of war material, including five thousand guns, 25,000 machine guns and 1,700 planes.

The armistice effectively brought an end to fours years of fighting in the First World War.

When is Remembrance Sunday?

Although the date of Armistace Day is fixed Remembrance Sunday is moveable and is held on the second Sunday in November. This year will take place on Sunday, November 12.

Why do we have a two-minute silence?

The silence is meant to be time for people to remember those who lost their lives fighting for their country. On 7 November, 1919, King George V issued a proclamation which called for a two-minute silence.

Why do we wear poppies?

The Royal British Legion explains that the red poppy is an emblem of remembrance and hope. It stresses it is not “blood” red or a sign of support for war and death.

Poppies were the flowers which grew on the battlefields after the First World War ended. Poppies are tough flowers, and can grow anywhere, but are also delicate. It is thought they are a fitting emblem to remember those who died.

Where does the Poopy Appeal  money go?

When should you wear your poppy?

Many believe that you should wear it in the 11 days leading up to Remembrance Day.

How should you wear it?

What is the Scottish poppy and why is there no leaf?

While still a symbol of remembrance that helps raise money for veterans, poppies sold in Scotland have four petals and no leaf. They are produced by different organisations. While the Royal British Legion produces poppies in England, Wales and Northern Ireland, Poppyscotland produces poppies for Scotland. They are made by veterans with disabilities in a factory in Edinburgh.

Poppyscotland says on its website: “Apart from being botanically incorrect it would cost £15,000 to make leaves for all poppies – money we feel is better spent on veterans. We might be slightly biased but we think the Scottish poppy looks nicer too!”

The Northern Ireland and the Republic of Ireland poppy

Irish soldiers fought and died in the world wars. The Royal British Legion holds a Poppy Appeal both in Northern Ireland and the Republic of Ireland. However recent history means the poppy is a lot more controversial in these countries.

The IRA, bombed a Remembrance Day ceremony in Enniskillen on 8Novenber 8, 1987 which killed 11 people and left  more than 60 injured.

It is designed to help remember those who have died in conflict, while emphasising a lasting commitment to peace.

It was first introduced by the Women’s Co-operative Guild in 1933 and is now sold by the Peace Pledge Union.

Their motto is: “War is a crime against humanity. I renounce war, and am therefore determined not to support any kind of war. I am also determined to work for the removal of all causes of war.”

It regained popularity in the 1980s after Margaret Thatcher criticised it. However, the Royal British Legion says on its website: “We see no conflict in wearing the red poppy alongside the white poppy. “

This was created in 2006 to remember the animal victims of war.

All donations go to the charity Animal Aid, who say of their appeal: “During human conflicts, animals have been used as messengers, for detection, scouting and rescue, as beasts of burden and on the frontline.

“Please wear a purple poppy and help us to raise awareness of these forgotten victims.”

A spokesperson for Animal Aid said: “Animals are not heroes, they are victims. They do not give their lives, they are taken.”

The Royal British Legion says of the purple poppy: “”We see no conflict in wearing the red poppy next to the purple or white poppy. Many animal rights supporters also support our work. “