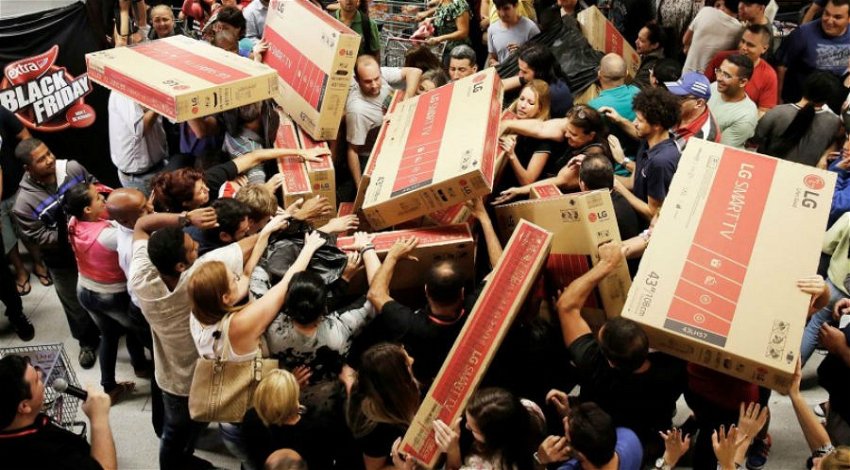 If retailers can afford such massive discounts next weekend, are consumers being scammed the rest of the year, asks Terence Kennedy.

GOT your Black Friday shopping spree planned? Ready to splash out next weekend on that electronic spaghetti fork you’ve always wanted, a WiFi-enabled toaster or a remotecontrolled churros extruder?

In just over a decade Black Friday has morphed into a worldwide shopping frenzy (followed no doubt by Blue Saturday when adding up the resulting credit card bills).

For one more bite at the cherry, retailers have added Cyber Monday, so now you really can shop till you drop. Or your bank account does.

Since Spanish rules on sale dates were lifted in 2012, Viernes Negro has taken off here: 90 per cent of Spaniards surveyed knew what it was, nearly 60 per cent actually buy something, and the country is expected to splash out nearly €1.3 billion next weekend on discounts, real or imagined.

Cynics say the one who profits most from Black Friday is the one smart enough not to go shopping that day.

Certainly those who do choose to partake may be safer here than in America, where there have been seven Black Friday deaths listed and nearly a hundred serious injuries.

Indeed, two people died during a shooting altercation at a Toys ‘R’ Us in California. Someone must really have wanted that cut-price Disney princess.

Physical Black Friday shoppers (those who will surge to the bricks and mortar retailers this weekend) are said to be older, less internetsavvy and often pay in cash.

Cyber Monday shoppers are younger, more affluent, use credit cards and often don’t have a lot of time (or patience) for shopping.

So why brave the madding crowds when you can bankrupt yourself so much more comfortably from home?

Some online retailers have even extended the buying frenzy to a whole week (here’s lookin’ at you Amazon). The trick to coming out on top next week is to know what you want, and to have priced it before the madness strikes.

‘Fifty per cent off!’ might indeed mean it’s half-price (assuming it doesn’t mean only half the product is actually present…). But half-price of what?

The price some overhyped designer store might have tried and failed to charge? Or the manufacturer’s recommended retail price which no self-respecting consumer would ever expect to pay?

Ask yourself the killer question: it may be hyperventilatingly cheap, but what exactly is a WiFi detector shirt, and do I really need one?

So happy shopping one and all, and where I won’t be spending my money next week is on an Irish site with my favourite Black Friday offer ever: ‘Two for the price of three!!’

Deal or no deal

HALF a million people in the States take out loans every year just to shop on Black Friday.

This year Spain may spend €1.3 billion, and virtually every major retailer is now on board. But beware of over-inflated discount hype.

A British investigation last year found that up to half the goods on offer were not the real deal, that the ‘was’ price had been inflated, that the goods were obsolete models, or that some were actually cheaper before or after the big day (or week).

Buy from reputable retailers with a money-back guarantee, use a credit card rather than a debit one if you can because then the bank will foot the bill if things go wrong, and use your browser’s bookmarks to keep track as you trawl the web and things get hectic.