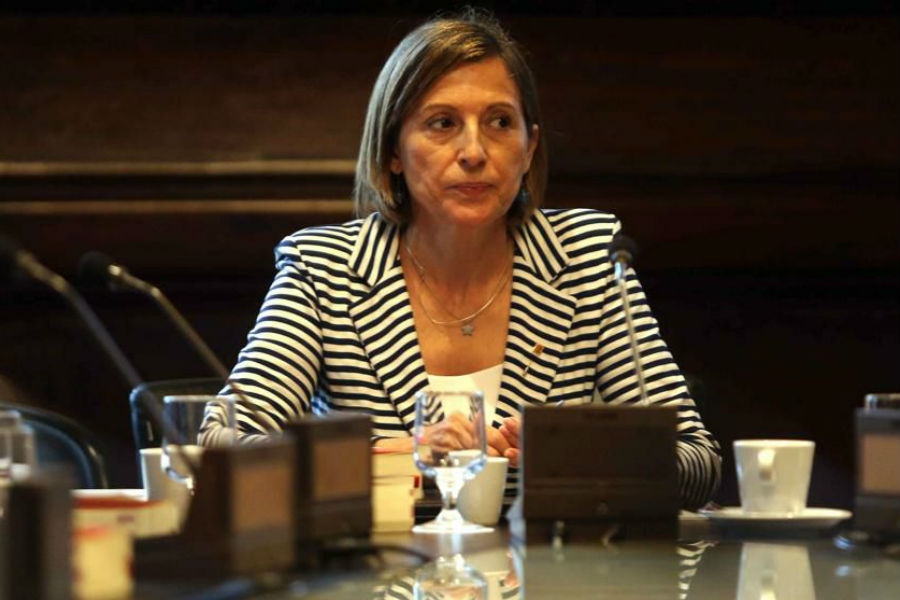 DETERMINED: Is Carmen Forcadell, Speaker of the Catalan parliament, playing the long game?

DOES Carmen Forcadell, Speaker of the Catalan parliament, speak with a forked tongue?

Forcadell avoided being remanded along with the eight members of the regional government who didn’t run off to Brussels by claiming that Cataluña’s UDI was symbolic.

She also told the examining judge that if she remained active in politics she would do so “within the constitutional framework.

“But don’t let’s forget that before becoming Speaker Forcadell was president of the ardently pro-independence Asamblea Nacional de Cataluña which has been behind separatist politicians – and sometimes ahead of them – on the road to UDI.

It now turns out that Forcadell will be Number Four on the Esquerra Republica (ERC) voting list in the December 21 elections.

Could be that remanded

ERC leader Oriol Junqueras is sincere when he said recently that the secessionists had miscalculated with their premature UDI declaration.

But they’re all playing a long game, Forcadell included. They are no less committed to independence but willing to wait a little longer, that’s all.

CARLES PUIGDEMONT who believes he is Cataluña’s president in exile, said in a Le Soir interview that he was “always open to another relationship with Spain” and believed “an alternative to independence was still possible.”

He had always sought formulas for avoiding a break with Spain, he declared, but omitted to mention his speech on taking over as Catalan president in 2016.

This was when he promised to follow the route map for independence set out by his predecessor Artur Mas “to the letter” and lead Cataluña to independence.

Puigdemont was either lying then or is lying now and with his PDeCAT party shunned for the December 21 elections by the other pro-independence parties, he could be trying to hedge his bets.

He’s wasting his time. If the independence parties won the regional elections would they want Puigdemont at their head after the hash he made of UDI?

THE Spanish football team’s customary World Cup red shirt has a yellow and purple stripe down one side.

Adidas insists the offending streak is petrol blue, but red and blue combine to make purple and it looks as though the kit celebrates the old Republican flag.

The national government in Madrid is understandably not impressed but not nearly as unhappy as football fans as the shirt costs €150.

A load of bull

The Spanish can make up their own minds about bullfighting Boris. Meanwhile stick to Brexit and what you know.