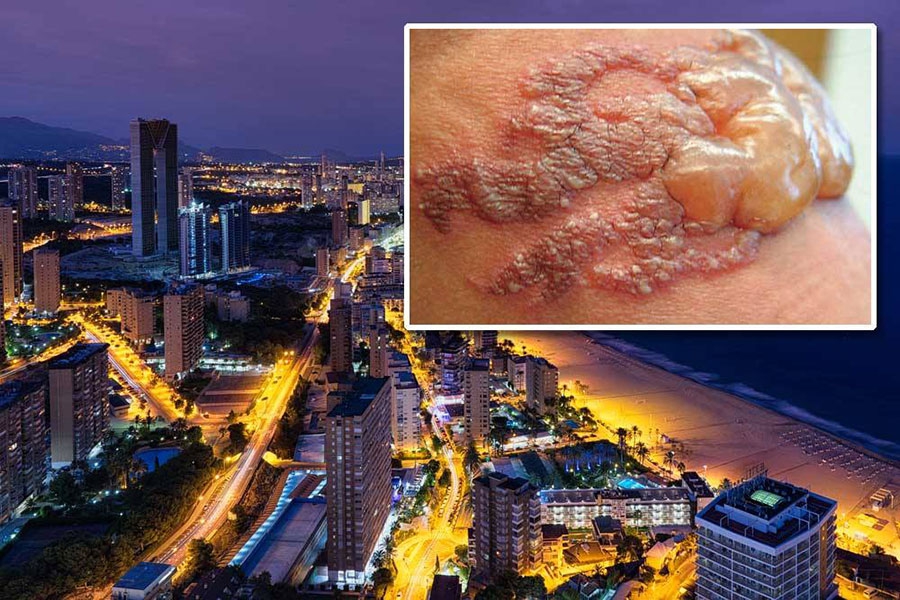 A 28-YEAR-OLD plumber from Leicester may be scarred for life after getting a moustache and chin beard henna tattoo while on holiday on Spain’s Costa Blanca.

Arran Maye was with 20 friends when he got the €10 tattoo done for a laugh for a fancy dress competition.

But he had a severe allergic reaction to PPD, the chemical found in henna and his face swelled up and he was left in excruciating pain with burns to his skin.

On the flight home the reaction became worse and his airways started to shut down. After landing his friends rushed to him to hospital in Leicester where he remained in intensive for two days.

Mr Maye told The Sun newspaper, “The bloke in the shop said it would wash off naturally in a few days, and I believed him.

“It was fine at first but then it got tingly. The next day it was blistering and, by the Sunday, my face was a balloon.It was like it was trying to push out the henna.

“The doctors said I’ll have a scar for six months, exactly in the outline of the moustache.”

He added, “Now the lads at work think I’m a right numpty and will do until I get rid of this damned fake moustache.”

Doctors have told Arran he could be scarred for life and may need skin grafts to remove the imprint of the henna inking.

The NHS Choices website says, “If you see a shop or stall offering to paint black tattoos onto your skin, don’t be tempted to get one.

It could leave you scarred for life and put you at risk of a life-threatening allergic reaction.”

They may also be available in the UK, at festivals and fairs, and to buy online.”

“But the black paste used in these temporary tattoos may contain high levels of a chemical dye so powerful and toxic that it is illegal to use it on the skin in this way.”

They go on to say, “Real henna, which is generally safe to use, is an orange colour, with a red or brown tint to it.

“Any very dark temporary tattoo should be treated with caution.”

Lisa Bickerstaffe at the British Skin Foundation agrees. “Check the colour if a product is described as ‘henna’,” she says.

“Henna is an orange-red colour, so if you are offered a temporary tattoo with ‘black henna’, it isn’t actually true henna. If in doubt, stay away.”