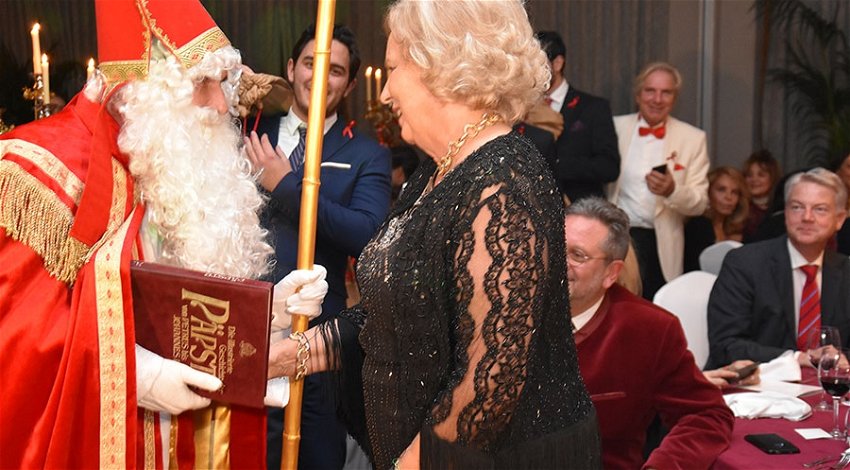 MORE than 150 people arrived at the Puente Romano Hotel in Marbella to attend the 22nd St. Nikolaus Gala in aid of the Concordia charity last Saturday.

Income from the evening which attracts the rich and famous from the Costa del Sol goes to help support the Concordia Anti-Aids Asociacion (ACAS) founded by Princess Marie-Louise of Prussia.

Following drinks and canapés, young helpers rang bells to usher the guests into the main Salon in order to start the proceedings and to enjoy a three course dinner.

First Princess Marie-Louise spoke about the work that the charity does, thanked all of those involved in helping those who have caught the virus and also in trying to warn others about the dangers of unprotected sex.

Guests applauded her speech enthusiastically and then began their meal which was up to the usual standards of the hotel as the entertainment commenced with the Pastoral Villa de Ojen, a group of singers and musicians who could perhaps be considered the Spanish equivalent of Morris Dancers.

The group of more than 20 chanted local Christmas songs accompanied by bottles being struck, triangles, drums, tambourines and traditional zambombas (a clay pot topped by a tight skin with a stick which when drawn up and down makes a percussive noise).

These were not Christmas carols as the British know them but a traditional form of Christmas music performed by shepherds in Andalucia for hundreds of years.

The more traditional but exceptionally gifted Marbella Gospel Choir which is an eight piece directed by Mike Harding (Mr Maph) consisting of his wife Simone, two daughters, a son, a nephew and two friends took the stage next.

They were, as is to be expected when Mike and Simone are involved, absolutely superb delivering some of the best known gospel songs and a few Christmas favourites including the haunting Hallelujah by Leonard Cohen to an appreciative and enthusiastic audience.

There was a break in the entertainment to allow St Nikolaus to tour the room and for the very willing young local helpers to sell tickets for the charity ‘tombola’. Literally hundreds of gifts had been donated by local companies, each worth at least €50 (but most much more) and tickets at that price were eagerly snapped up.

Some of the tombola gifts

As the meal finished the dancing started to the sounds of the upbeat Pilar y Carlos with a mix of Latin pop.

Unlike last year, when the rain was tumultuous, the weather was clement and those attending enjoyed a fabulous evening which raised much needed funds for the charity, details of which can be viewed at www.concordiamarbella.com.