Smartphones are the new cigarettes 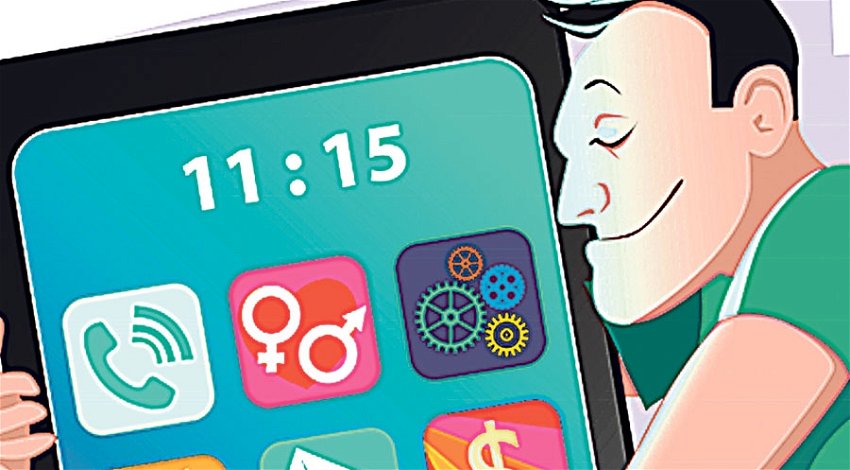 SMARTPHONES: Time to retrain the brain?

After a decade of growing smartphone addiction, Terence Kennedy now shares a recognised medical syndrome: FOMO, the fear of missing out

SMOKING has addicted us ever since Walt Raleigh discovered that sticking a leaf in your mouth and setting fire to it could do more than just burn your lips.

But society’s greatest addiction is barely getting started: our smartphones.

The internet is knee-deep in surveys as we know. One of the latest says 87 per cent of owners go to sleep and wake up with their smartphones. Younger users touch, swipe or tap their phones 2,617 times a day.

Those of us closer to our sell-by dates may be slightly less hooked, but not necessarily. The biggest growth in smartphone use is now among the so-called ‘silver surfers.’

The figures for average teen messaging are truly breathtaking, not to mention thumb-destroying: 67 texts tapped out daily, with a staggering 1,831 a day coming in.

I feel quite inadequate. Some 900 million texts sent every day according to the latest figures, and the best I can usually manage is ‘On way put kettle,’ or my standby to my other half during hypermarket ‘mazeophobia’: ‘Where hell r u?’

Never before has one device combined every element of modern mass media: telephony, texting, music, video, the internet, social media, video games and that most vital and most accessed material of all: cat videos. Barely 10 years since the first iPhone changed the world forever, we are well and truly hooked.

With almost as many mobile phones in the world as people, and two billion smartphones engaged in a frenetic tapping routine even Fred Astaire couldn’t match, is it time to wave a red flag?

Smartphone use makes us crash our cars, walk into lampposts, send inappropriate messages to the wrong people and heaven help us all, seriously wind-up Kim Jong-un. One American city has even conceded defeat and is embedding its ‘Walk’ and ‘Don’t Walk’ street-corner commands into the kerb, because it’s too much trouble for ambulatory texters to actually look up when crossing.

Unlike man-flu which my partner steadfastly refuses to credit as a ‘real’ disease, smartphone addiction is now a recognised condition, though you do have to wonder whether treating it with therapy widely available online isn’t a bit like prescribing diet pills to an anorexic.

If you recognise yourself even remotely in some of the above, perhaps it’s time to just put down your phone, get out there, and smell the roses. At least until someone invents a smartphone which can also produce odours, like the short-lived 1960 ‘Smell-o-Vision’ experimental movie.

Perhaps my dear old granddad’s motto takes on a new life in this pixel-addicted era: ‘Everything in moderation ‘ except moderation.’

Turn off the tap

THERE are some simple steps if you’re tapping too much:

Set rules for your phone use; why not give it a break from nine in the evening to seven the next morning?

Don’t use your phone while driving. Though under my wife’s household rules, texting over dinner will have far more serious consequences.

Schedule break times from your smartphone or social media.

Download an application if you’re really in trouble: among them, BreakFree and Menthal let you temper your online usage, while ColdTurkey and SelfControl let you block the really addictive sites.

And when you really know you have a problem? If you identify with this recent headline from the Daily Telegraph:

‘One in 10 of us check our smartphones during sex.’ Seriously?