On International Migrant Day, we take an extended look at the Archidona prison riots, with accounts from an inmate, activists, government officials and the Red Cross.

DRAMATIC scenes continue to emerge from an ‘unopened’ prison in Archidona, where the Spanish government have been holding hundreds of migrants since mid-November.

Amid accusations of the use of tear gas, rubber bullets, batons and riot police on prisoners protesting against a lack of food last week, Spanish authorities say they have now taken two children from the group into their care.

Around 200 demonstrators yesterday called on the government to release the mainly Algerian migrants, according to Spanish media.

After being accused for weeks of breaking the law, the government reportedly began deporting the migrants last week – allegedly without them being allowed legal advice.

Activists say conditions at the prison, not scheduled to be opened until early next year, are inadequate.

On Wednesday afternoon, tensions came to a head. Activists believe the migrants were subjected to a brutal crackdown from riot police. 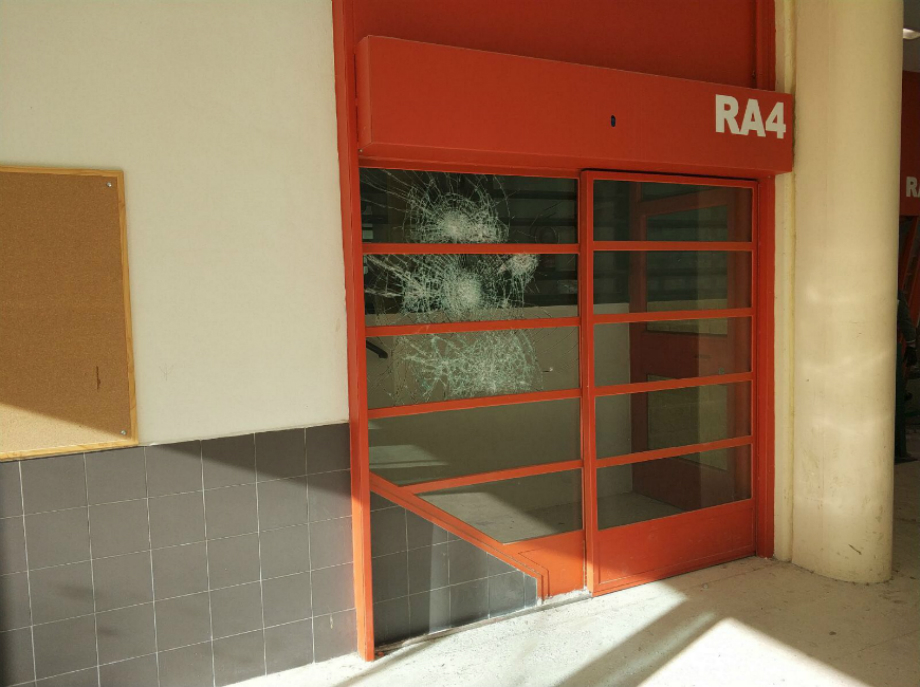 The migrants, mostly Algerian, were protesting against a lack of food and the deportation of their compatriots.

Activists claim that the group – numbering between 464 and 570 people, according to conflicting reports – were kept in the same clothes for 12 days.

They also allege there was initially no heating or running water at the facility.

Many other details are disputed but rights groups have roundly condemned the government, with their actions regularly being labelled “illegal” under Spanish and EU law.

However, the Ministry of the Interior dispute the claims and have sought to downplay Wednesday’s events as a “small incident”.

A spokesman said: “We can confirm that it was a small incident not a riot, without injured people and it was quickly controlled by the Spanish Police.

“In no case (can) this minor incident be considered as a serious incident or riot that also had no relevance or caused any injuries and any problem inside this new prison in Archidona.”

The ministry refused to say if any of the migrants have been taken from the prison back to Algeria, but did not deny that deportations had begun.

Rights groups claim that deportations began early last week. They are thought to be continuing, though details are difficult to confirm. However, at least 50 people are now thought to have been deported, according to activists and the Spanish media.

Carlos Lopez, a member of Plataforma Ciudadana (CIE), a group against the imprisoning of migrants in Archidona, describes Wednesday’s incident as a riot. Citing allegations from relatives of the inmates, he said: “We believe (because the sound from inside, smoke, police in photo with rubber bullet or tear gas weapons) the possibility that they used (rubber bullets, batons and tear gas), but we haven’t evidence to confirm that.” 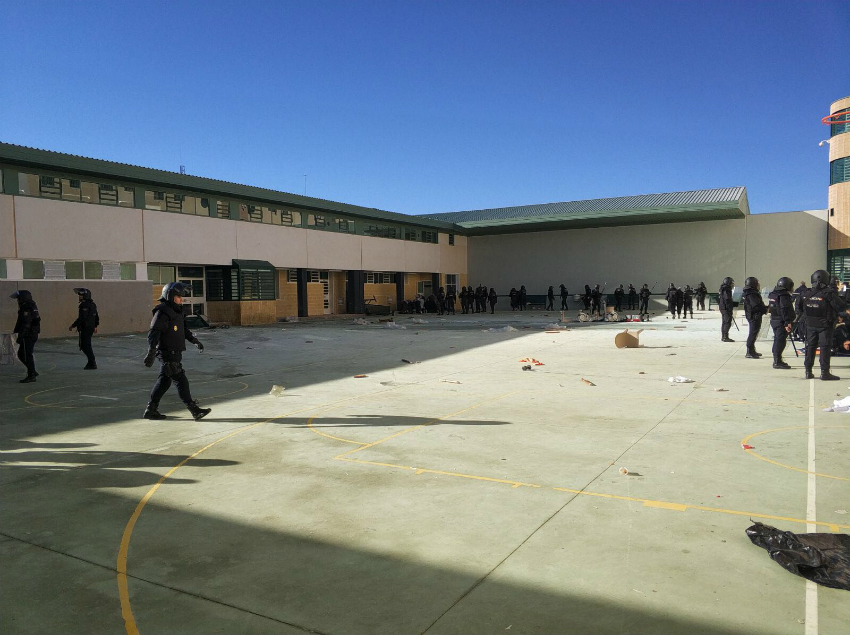 He believes at least three children were in the prison at the time.

Lopez, 37, suggested the government was “breaking their own laws” with “total impunity”.

Speaking via an activist, Mohamed Tellal, who was being held at the prison on Friday, said*: ” Young people were fed up with staying in jail and being expelled in groups without a real case-by-case study.

“These riots arrived on the third day after the big waves of expulsion. For those who remained inside the prison, it is a way of expressing their distress and saying no to this massive expulsion. They risked their lives and invested a lot of money so they could ride a boat, and they want the right to a lawyer who actually has their rights and to see the judge.

“The Spanish government has not taken any consideration of these reasons.” 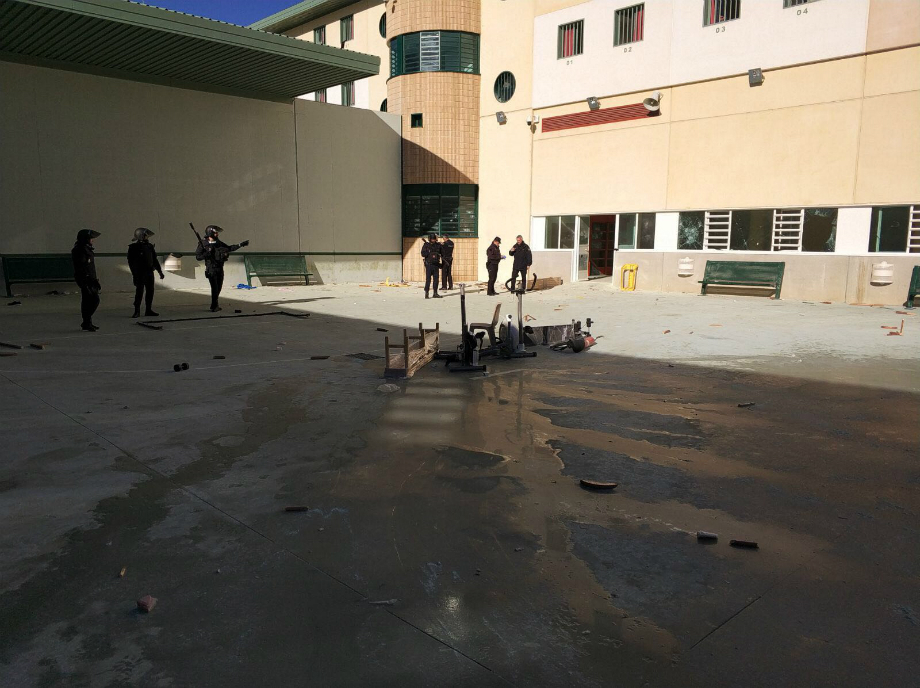 The 29-year-old Algerian added: “Most of the young people began screaming about liberty and banging on the tables to make noise until there was an altercation between a youngster and a policeman, which eventually escalated. The police (violently) humiliated them by putting them on their knees after using the (tear) gas.”

Phones have reportedly been taken from the migrants considered responsible for Wednesday’s events.

A spokesperson for the CIE platform last week suggested that only one doctor and interpreter was available for the migrants.

The government reportedly said they will “try” to not exceed a 60 day limit on keeping the migrants in the prison, during a meeting with Archidona’s mayor.

Spain has seen a huge influx of migrants this year and in August the UN warned that the country did not have the facilities to cope.

The Spanish government have said the prison is being used because other facilities were full, due to the “exceptional situation” regarding migrant numbers.

“Refugees are brought chained by three”

Tellal, the Algerian inmate, added: “Life is very difficult inside the prison for people who have not committed crimes. They did not expect to be in the prison.

“They have fled the miseries where the war is in search of better lives and they are treated in inhuman ways. They do not have clothes to change themselves or hygiene products to wash.

“They do not eat enough, they are entitled to small portions of food, one at noon and one in the evening. The prison was not ready to welcome people.

“It is very cold inside and there is no drinking water in the taps. The visits last only a few minutes after a long wait and the refugees are brought chained by three as if they are criminals.” 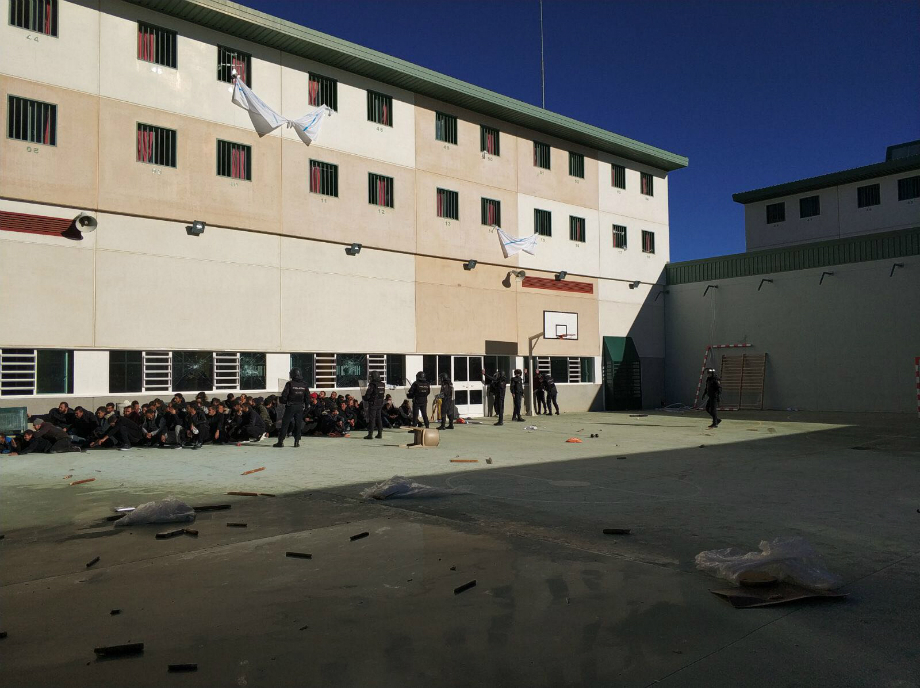 José Javier Sánchez Espinosa, Refugees Program Coordinator from the Spanish Red Cross, said: “Since late November, we are carrying out a project of Social and Humanitarian Assistance in Archidona center. Our team, 21 Red Cross workers, are Social Workers, Social Assistants and experts in Social Mediation.

“Restoring family links and supporting potential Asylum applicants are amongst the top priorities of our work.”

Thousands of refugees have attempted to cross the Mediterranean Sea in an attempt to reach Europe in recent months.

The International Organisation for Migration said “20,473 migrants have made it to Spain by sea in 2017, and we have registered 210 deaths on this route”, but did not comment further.

*Mohamed Tellal’s words have been translated from French, and therefore some meaning may have been lost.