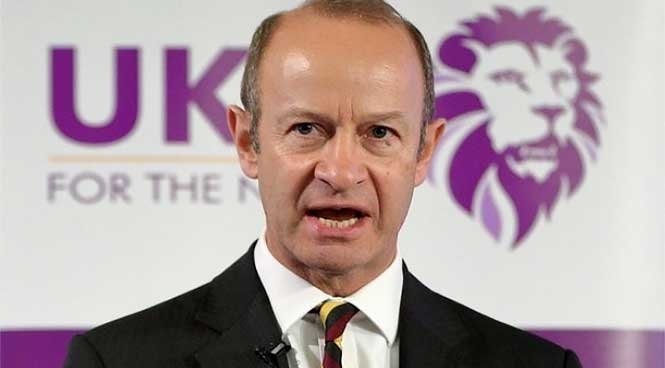 UKIP’S PARTY LEADER, Henry Bolton, has refused calls to step down from his position when he delivered a statement from outside the Grand Hotel in Folkestone this afternoon.

The party’s arts and culture spokesman, David Meacock, said in a Tweet: “Adding to the wave of resignations I’ve resigned as UKIP’s Culture and Arts Spokesman. UKIP Shadow Cabinet is becoming a modern version of Haydn’s ‘Farewell’ Symphony: players walked off stage like green bottles falling off a wall, in protest at being kept away from their wives.”

In Henry Bolton’s prepared statement this afternoon, he said: “Yesterday the UKIP National Executive Committee decided to initiate and embark upon a constitutional course to remove me as leader of the Party.

“I urged the NEC instead to focus on the unity and cohesion of the Party and on the need to concentrate on such matters as the local government election campaign and the necessity of mobilising our efforts to ensure the government delivers true independence in all areas of government and administration when we leave the European Union.

“This is the most pressing matter facing our country and I am determined not to allow the NEC to distract the Party away from participating forcefully in the Independence debate.

“Without reflecting at all on its individual members, the NEC, as presently constituted, is unfit for purpose and has severely handicapped the Party’s progress and political delivery for some years, as all recent UKIP leaders will attest. It has not only lost the confidence of me as the Party leader in its ability to act objectively as the Party’s governing body, it has also lost the confidence of a large proportion of the membership.

“The NEC requires significant and urgent reform. To that end, again during the coming weeks, I shall be proposing a new Party constitution, with a newly constituted and reformed NEC. Likewise, it is now time to put an end to the factional in-fighting within the Party and to remove those who have been a part of that.

“In a single Phrase, it is time to ‘Drain the Swamp’.

“Let me re-iterate, the most pressing issue facing our country is to ensure that we gain full independence from the European Union; that we do not allow the government to betray the country by compromising that goal. That is the object to which I shall be directing all of my energies in the coming weeks.”