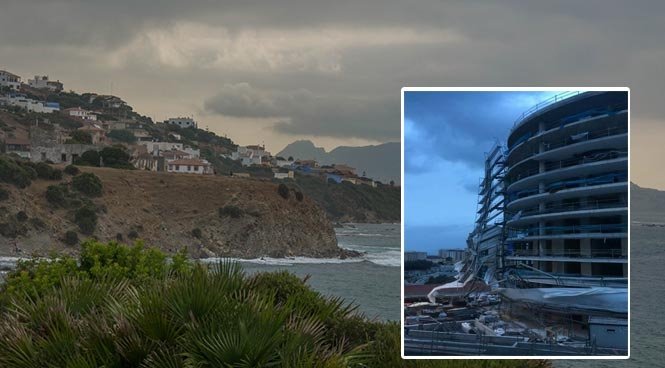 DESTRUCTION: (inset) The aftermath of the damage

THIS is the terrifying moment a huge amount of scaffolding fell from a building in Gibraltar.

The scaffolding was ripped from the new Ocean Spa Plaza, which is still currently under construction, in strong winds in the early hours.

Several traffic disruptions and school closures have been reported as a result and in a statement, Ocean Spa Plaza said: “At approximately 02.30 this morning, severe gale force winds penetrated the protective covering on the upper floors of the Ocean Spa Plaza site and tore apart many dozens WARNING: The following video contains strong language.

of steel eye bolts and bent the scaffolding poles.

“As a result, a portion of the site scaffolding became unsecure and was detached from the building. Although most of it was captured by the safety deck, which projects out at a lower level. Teams have been on site assessing the situation and are now securing other parts of the site with taut ropes and other safety apparatus.

“This is a difficult situation because the staff involved are encountering severe winds gusting over 100 km/h and this is making the operation to secure the site challenging. The safety of everyone in Gibraltar and our staff is our paramount concern. This is a live situation as strong winds continue to hit Gibraltar.

“Therefore, at this stage our focus is to secure the site and to continue to liaise with the relevant authorities to ensure that the site and the surrounding area are made as safe as possible, as quickly as possible.

“Once the above has been achieved, we will clear the detached scaffolding so that the local area can return to normal.”

While the current result of the damage is not currently known, no injuries have been reported.

An anonymous source told the Euro Weekly News: “I work just opposite the collapsed scaffolding and normally drive in so my boss messaged me to say not to.

“Colleagues are still arriving as they been stuck queuing for hours only to be turned away at the border, then having to park up and walk in.”