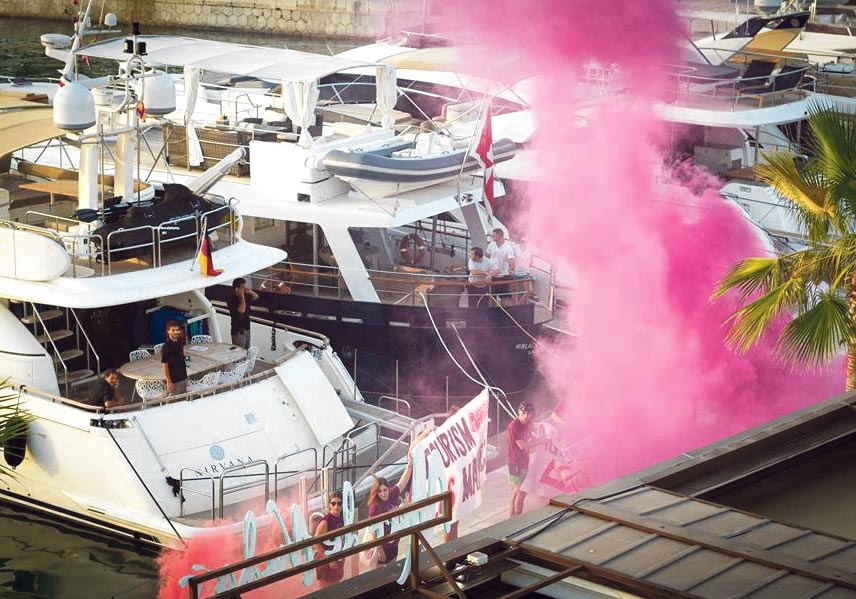 PROTEST: The members of Arran appeared in court over protests in Palma’s harbour in July 2017

MEMBERS of the leftist group Arran appeared before a court in Palma on public disorder charges following an anti-tourism protest in the city.

The 12 defendants were also charged with crimes relating to threats and damage caused during the demonstrations which saw protestors let off smoke flares in the city’s harbour.

Both of these crimes can result in jail sentences depending on the circumstances.

Authorities said the group were being hostile to tourists and acting violently while protesters said they were demonstrating against serious issues affecting Mallorca.

The group lit the flares and waved banners bearing slogans criticising tourism levels on the island nearby moored yachts and restaurant terraces filled with holidaymakers.

A video posted online by the group appears to show them chanting outside the establishments and someone running across the boats while the air fills with red smoke.

Restaurant owners made complaints to police following the protest which led to the charges being brought.

The Balearic Islands government and political parties have said the Arran group acted violently and expressed tourist-phobic views. They also accused the protesters of creating a negative image of the islands as a destination for holidaymakers.

Angels MJ and Pau Oliver, spokespeople for Arran in Palma, said they had been protesting against the problems caused by mass tourism and that they did not cause any damage.

“Arran is not tourist-phobic. What we want is control and regulation of the economic activity that goes along with tourism that we know will not go away,” they said.

MJ and Oliver added they did not damage yachts or restaurants during the protests and that they only threw confetti into one.

Footage of the protest uploaded by Arran to Facebook

“Our intention was to get media coverage for our demands. That’s why we only showed signs, lit some flares and threw confetti at the establishment before picking it up and leaving.

“It is clear that mass tourism has caused many problems such as lack of housing, destruction of the environment and increased job insecurity.”

The Palma court has called several witnesses to give their account of the events which took place in July 2017. The defendants are set to testify on March 9. The trial continues.