Did you hear the one about the frog? 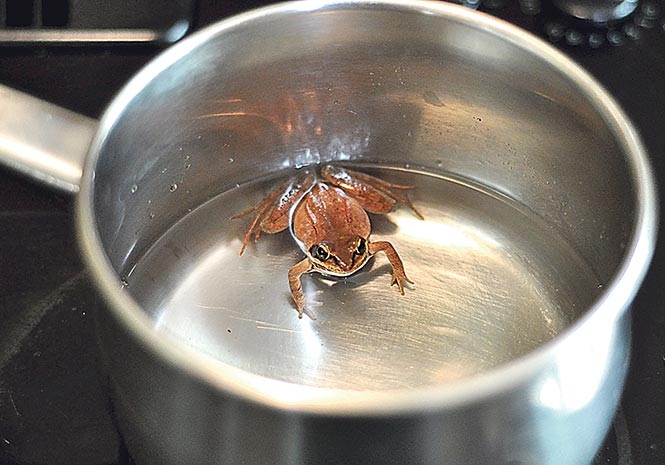 Frog in a pot (no frogs were injured during this photo shoot).

I’D like to share a conversation I had last week with some Russian friends about a frog.

It all started from a glib comment on how the ‘private’ information shared in our phone calls, messages and emails is being analysed. Everything we read and write is instantaneously evaluated so we can be targeted with specific adverts or promotions relevant to what’s happening in our lives.

Until recently ‘the people’ have been reluctant to offer any personal details to anyone, let alone the government. Today we can’t give them enough information; perhaps simply because they’ve changed their look and we’re too gullible to realise.

We share everything voluntarily; not just where we live, but who we like, what we like and moreover, what we don’t like. What we don’t share they see anyway. We are virtually (in all senses of the word) handing over our lives to cyber space and what is most worrying is that for our kids this is the norm.

Our conversation turned to the cars being introduced into the market, every new model more automated than the last. A car can park itself and a central ‘something’ can lock or unlock, activate or deactivate your vehicle from who knows where.

This led us to talking about being trapped in technology, kids trapped in virtual game worlds and people trapped in the money game and whether we would also become trapped one day by the robots with AI (artificial intelligence) that have already debated whether it would make sense or not to eradicate humanity.

Even people with normal intelligence know the logical answer to that question is yes.

We then talked about the process that Hitler took to eradicate sectors of humanity.  The process was costly and time-consuming.  Firstly identifying the people, then labelling them, then herding them to concentrated areas and then on to the gas chambers.

Today unfortunately it could all be done so easily, cheaply and efficiently. In a not too distant future if the ‘powers that be’ decided to eradicate a selection of humanity all they’d have to do for example is create a panic to get us all in our cars, centrally implement a mass lock down and remotely pilot us all, as if on conveyor belts, through the extermination process. All of us self labelled, packed up and ready to go.

That’s when we started talking about the fable of the frog. If said frog were to be put in boiling water he would jump out, but if he were to be put in tepid water and heated to boiling point very slowly, he’d be cooked before he realised what was happening.

Whether a frog would really do that or not I don’t know, but I do know that our conversation left us feeling like we could all very well be the frog that got cooked alive and that humanity may actually be reaching boiling point, but we’re all just too busy to notice or perceive the imminent danger.