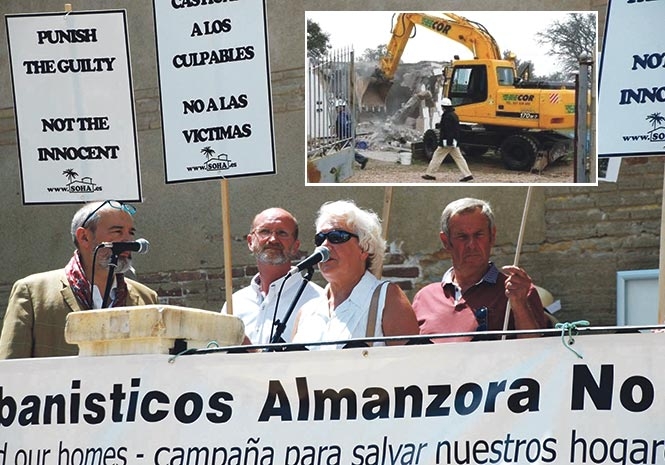 TEN YEAR BATTLE: Helen Prior speaks at a 2016 rally while husband Len (right) looks on and (inset) bulldozers demolish the couple’s villa in 2008.

AFTER a decade of agony Helen and Len Prior have finally received a payout for their illegally demolished home.

“Now this is over, we just want to try and recover our lives, we have lost 10 years that no amount of money can ever replace,” Helen said.

Helen thanked lawyers Victor Martinez and Jose Contreras for their “hard work over the last 10 years,” but pointed out that the payout is “very poor” since it does not even cover the original €350,000 cost of their home.

“The house was legal and demolished for political reasons, we were scapegoats,” she said. “I was awarded €1,500 for ‘moral damages’ and my husband €7,500 for 10 years of suffering, ridiculous.

“In any other EU country the amount would have been much higher,” she added.

The Priors’ story made international headlines after their home was bulldozed over ‘planning irregularities,’ although the couple insist the build was legal after the town hall granted them a municipal construction licence in 2002.

But their two-storey dream villa was pulled down in 2008 and they were forced to live in a garage for four-and-a-half years, with the demolition order later annulled by the Constitutional Court.

In 2016 they won a court battle entitling them to €425,185 in compensation, but the Andalucian High Court of Justice later ruled that they should receive just over half that amount.

“I hope that you can at least continue with your lives more peacefully.

“With the good humour that has characterised them during the last 10 years that their struggle has lasted, they have shown great tenacity and resistance and are an example to all of us.

“I give all my love and admiration to the Priors.”

And Helen added that at least “our case has helped others.

“We have supported AUAN and fought to change the laws to protect the innocent and those that bought property in good faith.”

Politicians from the local Popular Party have called for a public apology to the Priors via social media.