Does Benidorm need to take a holiday break after 10 years? 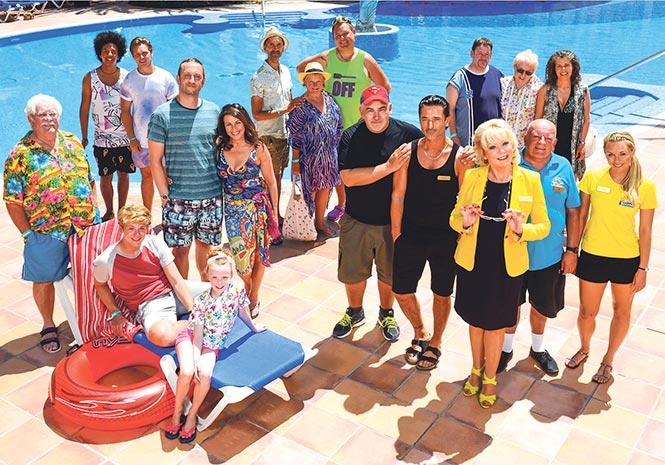 FUN IN THE SUN: Benidorm.

Benidorm, ITV1 Wednesdays, is back for another season of fun in the sun.

I’m still not sure that the hour-long format works, I think the writing was much punchier with a 30-minute slot, but for a show celebrating a significant telly milestone someone is clearly doing something right.

The season 10 launch saw Joyce Temple-Savage (I would love to know the back story here, is there a Mr Temple and/or Savage in her past and was she ever at Butlins Skegness, maybe 1974?) getting married to Monty.

John Challis plays a wonderfully shady Monty and is a great addition to the cast, but one of the reasons I continue to watch is Tim Healy in various states of excessive make-up and figure hugging clothes, including a wedding dress at Joyce’s big day.

Episode two saw Jacqueline panic about Kenneth going missing but, of course, he returns safe and sound. I’m pleased Joey is back, Nathan Bryon plays this part so well, but I’m not sure about his new friend Callum, who seems to be a taller version of Tiger who has hit the gym.

Critics of the show will say the once present comedy edge is slipping, but I think the format is sufficiently robust to withstand even the terrible weather we have been having on the Costa del Sol, although I hear the weather is better along the coast and further north.

Another show recently starting a new run is Mum, BBC2 Tuesdays. The second season kicked off with Cathy’s 60th birthday celebrations in the local gastro pub, followed by Cathy playing Easter Day cat and mouse with Michael, but it’s a game I enjoy. The show would surely stall if these two ever did manage some time alone?

This week Cathy hosted a BBQ and the cat and mouse game with Michael continued. But the stars this week are Cathy’s in-laws, Maureen and Reg, who should have their very own hashtag #sayhowitis. There were some predictable and deliberate misunderstandings on their part but some kinder touches too. The through line here is quite dark and for me, works really well.

I need to mention 100 Years Younger in 21 Days, ITV Tuesdays. I’ve no idea where this mess of a show was dreamed up, but I wish the producers had taken a duvet day when they commissioned it and simply not bothered. The celebrity ant-agers look just fine as they are and wouldn’t be themselves if they were a little less portly, had smoother skin or lived on a liquid diet – unless that liquid was Rioja and they lost a few ounces with some tapas in the sun.

The World’s Most Extraordinary Homes, BBC2 Wednesdays continued its look at, well homes which are extraordinary, in Switzerland this week. Caroline and Piers (you are right, I’ve no idea who they are either) walked us through homes made of concrete, a house with vintage cars in the basement and prison cell bedroom. I think the team should come to Spain, I could show them some truly extraordinary homes on the Costas and if we threw in the people who live in them, now there’s a show. You know some potential participants, right? Next week the team are in Japan…