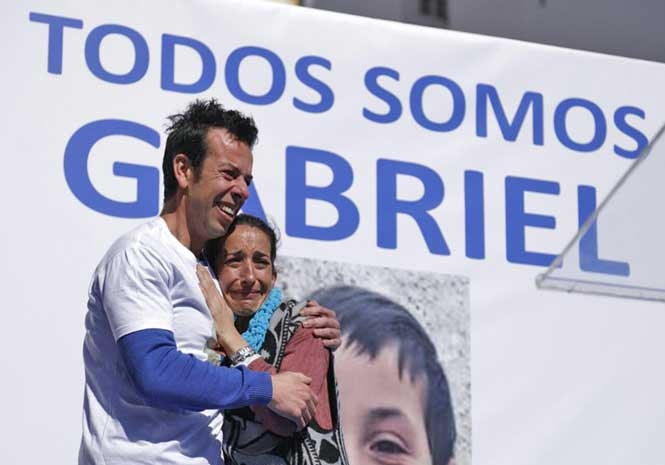 THE parents of a missing boy in Nijar, Almeria have addressed a rally of 8,000 people who were showing their support to find eight-year-old Gabriel Cruz Ramirez.
Gabriel was last seen on Tuesday, February 27, when he left his grandmother’s house in Las Hortichuelas, a hamlet in the town of Nijar in the province of Almeria.
He had gone to play at a friend’s house but he never returned.
Today, thousands of supporters holding “pescaitos” (little fish) rallied under the motto #TodosSomosGabriel. The pescaitos have become a symbol of the campaign and were inspired by Gabriel’s schoolmates because he liked the sea from a very young age.
Patricia Ramírez and Angel Cruz, parents of the eight-year-old boy, said that they are ‘more hope than ever’ to find their son.
Gabriel’s father said,”It is now ten days since he disappeared and we know that we have the best means at our disposal but we ask for encouragement and that the effort is multiplied to bring him back to us, to return to school, to play with his friends, so that he can live again. We want that.”
Fighting back tears his mother said, “We hope that the messages of ‘pescaitos’ will flood the whole world and soften the heart of whoever may have him and leave him in a public place, where he can ask for help and come back to us.
Meanwhile, also today, the search for Gabriel continued and police divers re-eaxmined a well about 100-metres from the house of Gabriel’s grandmother where he was last seen.
The well was searched within hours of Gabriel’s disappearance but nothing was found at the time.
Police have said that the area is ‘surrounded by wells that have already been examined, some several times, with the help of shepherds and farmers from Las Hortichuelas and its surroundings”.
Last week divers also searched a water treatment plant after a white vest with traces of Gabriel’s DNA was found.