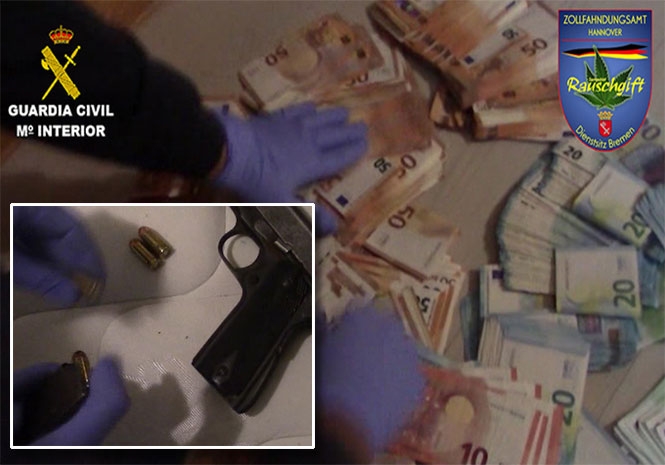 A DANGEROUS, international drug trafficking ring operating between Spain and Germany has been broken up in a joint police operation but left two police officers seriously injured.

Eighteen arrests have been made including in Coin (Malaga) and Granada in southern Spain.

In one of the raids two Guardia Civil officers were seriously injured after being rammed by a vehicle.

One tonne of marijuana was seized as well as,€212,000 in cash, a firearm, ammunition and eight vehicle

The operation was coordinated by Europol and has carried out jointly by Spain’s Guardia  Civil and the ZFA of Bremen, Germany.

Police described the investigation as complex.

The criminal network was structured in such a way so that even if one cell were to be discovered by police, the supply of illegal drugs could still be guaranteed.

The investigation began last June when Spanish police were tipped off about a 240-kilo consignment of marijuana, hidden in a lorry, originating from the provinces of Malaga and Granada,  that was intended for Bremen in Germany.

Shortly afterwards Guardia Civil officers found 120 kilograms of processed marijuana and 180 kilograms of hashish hidden in a truck in the municipality of Antequera (Malaga).

The international crime organisation then began to use other shipping methods to avoid being detected, sending parcels of drugs between 5 and 10 kilograms, through postal parcel companies.

In the first phase of the operation, last November raids took place in the towns of Otura and Monachil (Granada), where a cell of the organisation had created marijuana laboratories, seizing 12 kilograms of the vacuum-packed drug and €171,800 euros in cash.

The second phase of the operation focused on the towns of Coín (Málaga) and Granada, where other cells of the organisation were located.

In Coin police found another marijuana processing laboratory, arresting three people and seizing 87 kilograms of vacuum-packed marijuana and about €1,000 euros in cash.

In the Granada raid two Guardia Civil agents were seriously injured when they were rammed by a vehicle as the driver tried to avoid arrest.