GENEVA: Not so secret pleasures of travel 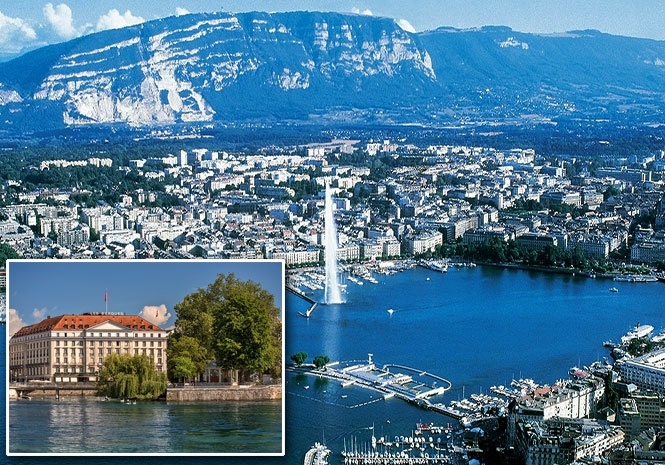 GENEVA: Recover from the secret pleasures of travel in luxury

GENEVA is an interesting place. Of course, it’s a city, with strong and distinctive architecture, beautiful views of Lake Geneva and mountains, compact not sprawling, with a fast-running river dissecting ‘downtown’.

A famous shopping street too, the Rue Du Rhone, which parallels the river Rhone’s immediate source at the lake’s overflow. The iconic Jet d’Eau Fountain blasts a tower of water into the air. Pleasure gardens and coffee shops to enjoy dotted around the lakeshore attracts citizen and visitor alike.
Geneva is usually associated with discreet bankers, jewellers and very high-end watches of exquisite mechanical complication manufactured with precious metals and adorned with jewels.

As well as a host of international organisations whose remits range from football to world health CERN the massive underground laboratory of the Large Hadron Collider buried deep underground close by peers into the secrets of the universe.

Where, though, to stay when you arrive?

There are many really good first-class hotels in Geneva. How could city not when it regularly hosts heads of state and frequently is the cockpit of diplomatic tussles?

On the shore of the river Rhone and overlooking the jet is the Hotel des Bergues.

First opened on May Day 1834 the hotel was the largest in Switzerland at the time.

More recently a Four Seasons group hotel; the Hotel des Bergues was extensively and fabulously refurbished and reopened in 2005 to great acclaim.


The public rooms shops and restaurants on the ground floor have attracted the wealthiest of travellers and people of business for more than 180 years. The hotel itself accommodated them in luxury.

Nowadays a hotel of this standard ought to have a first-class spa and, of course, the Hotel Des Bergues does.

While the hotel is at least 30 minutes from the international airport it is just a ten-minute walk from Geneva railway station.

My choice of mode of travel to Geneva is the train and I would start my approach in Zurich. Trains frequently travel between Zurich and Geneva. Choose a time that suits you. I select one that will allow me to have lunch on the train. Fine-dining it is not, however the views from the excellent restaurant cars are just a little bit more expansive than elsewhere. Good food and a little wine to enhance the mood.

The view as the train repeatedly bursts from a tunnel to traverse a valley to plunge into another tunnel to then burst again to a fresh view of mountain, snow and trees cannot be captured on film.

In memory it’s a stop-motion flicker of impressions. In its way quite exhausting.

The short walk down the hill from the railway station to the hotel, long enough to stretch your legs arrive ready for the pleasure of the table, the spa and a curated ambiance Louis-Philippe-style furnishings and a marble bathroom in every room.