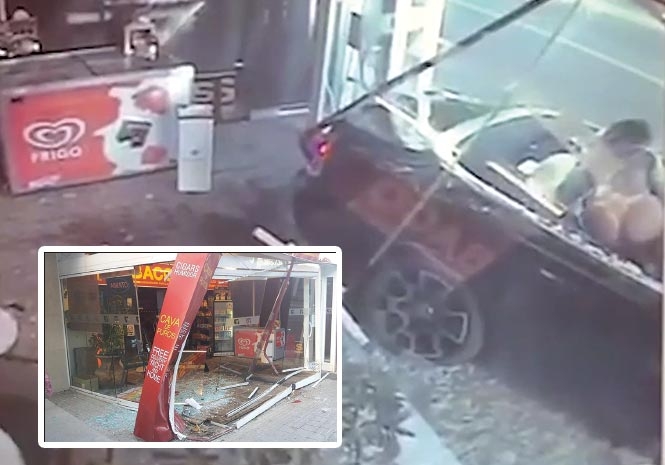 THONG TRACK: A pair of bikini-clad revellers, who were dancing on the back seat of the Rolls before the smash, also fled.

Mallorcan police hunted the playboy millionaire who wrecked his €300,000 convertible Rolls Royce while two women dressed in bikinis danced on the back seat.

Self-confessed ‘maverick tycoon’ Jody Sanders reversed the luxury car through the front window of a tobacconist in Portal Nous, Calvia.

The 39-year-old property magnate reportedly claimed his flip-flop got stuck under the accelerator pedal in the wake of the smash.

Dramatic CCTV footage taken from inside the shop shows one of the thong-clad women’s bare bottom as the high-end vehicle slams through the glass at high speed after mounting a kerb.

And in a second video, apparently shot on a bystander’s mobile phone, the curvy South American passengers are seen standing on the pavement in shock as people try to help Sanders out of the badly-damaged Rolls Royce Dawn Coupe.

Witnesses said the women were gyrating to music and taking selfies prior to the incident, and added that the trio fled on foot before police arrived to breathalyse him after the supercar “narrowly missed” around 20 people dining on a terrace.

The pricey motor, which has the personalised licence plate ‘JODY,’ has been impounded by authorities after being abandoned.

Maria Mamen, owner of the damaged shop, said she recognised Sanders since he regularly bought cigarettes there, adding that he had already called to apologise.

“He was very polite and asked for the insurance details so he could start sorting things out with them,” she said.

She added: “He’s obviously caused a good few thousand pounds damage to the shop as well as his own car.

“We’ve had to close and put security staff on to guard the merchandise night and day.

“The word round here is that the man had been partying with the two women at Nikki Beach in Magaluf and was off his head at the time.”

Jose Martin, manager of the nearby La Perla restaurant, said: “We saw the car pass a few minutes earlier.

“The man was driving and the music was blaring and two very pretty South American women were in bikinis dancing and taking selfies.

“They pulled into the car park of a supermarket that was closed just down the road and were sat there for around five minutes.

“The next minute there was this tremendous noise and the car reversed up the road at speed and hit the kerb just outside the restaurant terrace before spinning round and smashing into the tobacco shop next door.

“If he had hit the kerb a few seconds earlier we could have been looking at a major loss of life. There were about 20 people on the terrace at the time.

“I took the number plate of the car down and called police but by the time they arrived the driver and the two women were gone.”

Police said in a statement that they are searching for the driver, who has been identified.

Sanders is known to flaunt his wealthy lifestyle on social media, with his Facebook page picturing him in sports cars and on yachts as he quaffs Champagne with beautiful women.

He is believed to divide his time between a €1.4 million mansion in Henley-in-Arden, Warwickshire, and a luxury villa in Bendinat, close to the crash scene.