80-YEAR-OLD RIDDLE SOLVED: Why four villages in Spain were dive-bombed by the Nazis 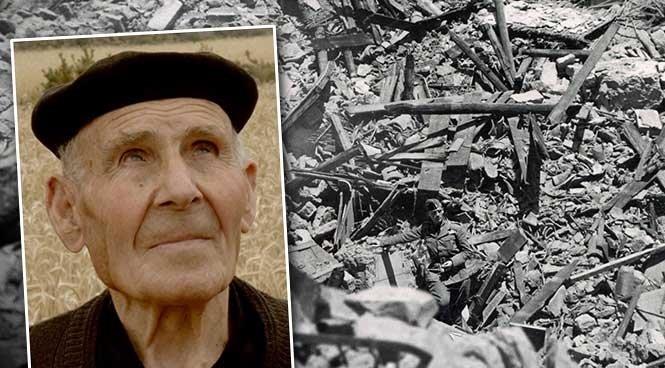 ‘WE NEVER UNDERSTOOD WHY THEY HAD CHOSEN US’: A Nazi soldier among buildings destroyed during one of the attacks and (inset) survivor Angel Beltran in the film

A MOVING new documentary film has revealed why four small villages in rural Valencia were targeted by Nazi bombers.

In May 1938, three Junkers 87-A dive-bombers, dubbed stukas by Nazi Germany’s Condor Legion, dropped their payloads on the hamlets of Benassal, Albocasser, Ares del Maestre and Vilar de Cane in Castellon province.

Many buildings were reduced to rubble and 38 people died.

“It was the first plane I saw in my life. It was like a great bird, but different,” remembers Obdulia Mir in Experimento Stuka (Stuka Experiment), which this week opened at the DocsValencia international documentary festival.

Entirely lacking strategic or military value to the Germans, locals for decades believed that the attacks were ordered by Republicans fighting for General Francisco Franco in the Spanish Civil war, which ended a year later.

Others blamed Franco’s troops themselves, since some of the villages briefly fell within Republican territory.

“My father heard that the Reds [Republicans] had destroyed the village and the church,” added Angel Beltran, the son of a Republican militant.

But 80 years later, modern-day residents have finally learned the truth.

University physics professor Oscar Vives, who was born in Benassal, travelled to Freiburg in Germany to study local archives after finding a clue in a Spanish Civil War book.

A short passage revealed that the Condor Legion used the Spanish villages as a testing ground for World War II operations, and in the German archive Vives found a folder containing 66 photographs of the attacks.

The images show Nazi soldiers driving to the bomb sites and studying the devastation before returning to an airbase in La Senia, Tarragona, and drinking beer together on the beach.

And the film reveals that the Nazis were testing whether their dive-bombers were able to transport and drop 500-kilo bombs, double the standard weight.

Rafa Moles, who directed the documentary alongside Pepe Andreu, says that the raids were among the world’s first “surgical military strikes.”

The film is a follow-up to the pair’s Five Days to Dance, an award-winning documentary about a school dance performance.