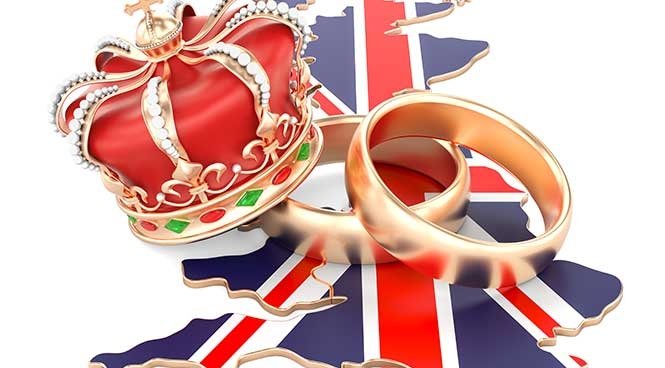 ROYAL WEDDING: Do you have the feelgood factor?

WHILE weddings traditionally bring families together, it seems the forthcoming royal nuptials in the UK are helping to unite the nation.

The latest research from Mintel finds this royal union is encouraging Brits to enjoy a sense of collective pride.

A third of Brits (33%) say Prince Harry and Meghan Markle’s wedding makes them feel more patriotic/proud to be British.

Across the nation, Londoners and those from the West Midlands (36%) are most likely to experience the wedding feelgood factor, with Scots (26%) the least likely to get a warm and fuzzy feeling from the upcoming marriage.

The royal wedding has wider impacts beyond the ‘big day’ itself. In a boost to homegrown companies, almost one five (17%) Brits say it encourages them to want to buy more ‘made in Britain’ products, with Londoners (22%) more likely to embrace Brand Britain than the rest of the UK.

And it seems the wedding has sparked a passion for the royal family amongst the nation’s young, with nearly a quarter (24%) of 16-24-year-old Brits saying the wedding makes them want to find out more about the Windsors such as watching films or TV programmes about them. This compares to 16% of the nation as a whole and just 9% of those aged 65+.

Younger Brits are also more than three times as likely as their older counterparts to be inspired by the wedding to visit sites with a royal connection, such as Windsor Castle and Buckingham Palace: around a quarter (23%) of those aged 16-24 say this, compared to just 7% of those aged 65+ and 15% of Brits overall.

Not to be left out of the Harry and Meghan bandwagon, interest in royal attractions translates across the Atlantic, with nearly one in five (19%) Americans saying they’d be interested in visiting sites in the UK associated with British royalty, rising to 28% of US 18-24-year-olds. This young demographic is similarly positive about the Queen and her family, as 30% of 18-24-year-old Americans would like to find out more about them and 28% are proud to have an American join the British royal family.

However, it seems their popularity is not universal as 11% of 18-24-year-old Americans admit they don’t know who Prince Harry or Meghan Markle are or they have not heard of them.

And despite Meghan Markle’s reputation as a style icon, only 8% of Brits say they’ve bought or may buy fashion inspired/worn by her or Prince Harry.

Jack Duckett, Senior Consumer Lifestyles Analyst at Mintel, said: “The most anticipated wedding of the year is nearly upon us and, at a time where stories about negativity and uncertainty dominate the headlines, it’s heartwarming that the fairytale story of a glamorous Californian actress marrying her British prince has captured the public’s imagination.

“As well as a morale booster for Brits, the considerable global media attention the royal wedding is attracting also underlines the commercial opportunities for ‘Brand Britain’. This includes increasing tourism to the UK, with people encouraged to come and see British landmarks for themselves. And beyond the actual wedding day, the halo effect can provide a big boost to British brands, as viewers take inspiration from everything from the bride’s dress designer to the cake baker.

“While the British royal family has long been popular with older generations, in recent years the celebrity nature of the younger royals, as well as shows such as Netflix’s The Crown, have helped bolster interest in the British monarchy among younger adults – both at home and abroad. This only expands the commercial benefits of this wedding, as it brings ‘Brand Britain’ to a younger, global audience.”

Quarter of Brits to watch FA Cup on the wedding day

For those unlucky enough to have been missed off the royal guest list, three in ten (30%) Brits say they’re proposing to watch the royal wedding on television, with 82% of these avid monarchy followers planning to throw their own viewing party or watch in the comfort of their own home.

However, it seems wedding fever is not universal, as 26% of Brits admit they will be watching the FA Cup Final, rising to 40% of males.

“The nation’s diehard monarchists will undoubtedly be tuning in to watch the royal wedding, but for others it is a good excuse to throw a party, with the hope of good weather only likely to further raise spirits. For a quarter of Brits, the FA Cup Final offers the chance to escape the blanket media coverage of the big day, royal wedding fatigue likely to have well and truly set in for these football fanatics.” Jack concludes.