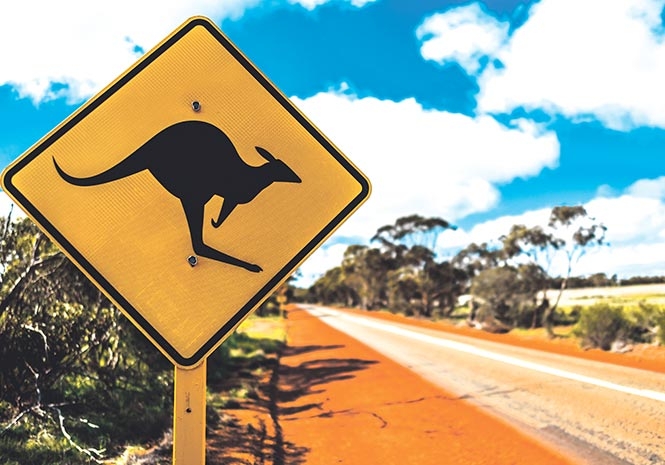 ROO MUST BE KIDDING: Leapy only spotted the hopping creatures from a distance.

TO all of you waiting with bated breath for the conclusion of my kangaroo spotting adventure… I’ve decided not to tell you! I jest, I jest!

Assuming there are still some of you interested in the outcome of my Australian saga, I promise to polish it off in this edition. Last week found me and my guitarist, heavily hung-over, waiting to club poor innocent rabbits over the head, as they emerged from their burrows which abounded on a hillock set in the wilds of the Australian outback.

‘Rick the Roo boy’, our guide for the day, had decided to catch a few rabbits before we actually set out on our kangaroo spotting expedition. He was now standing around a hundred yards away, removing his pet ferret, Freddy, from the sack it had travelled in. At this point I must reiterate the fact that there was no chance that either Mike, or myself, had any intention whatsoever of bashing some poor unsuspecting bunny’s head in, whatever ‘Rick the Roo boy’ instructed.

“Roight,” shouted Rick, “when I put Freddy into the burrow over here, be ready.

“They should start running out after a few minutes. You gotta be quick, awright?”

I turned to Mike. “What we need to do,” I whispered, “is to just rush about as though we were trying our best, and just miss ’em all.”

Mike nodded his assent. We took our positions.

be ready,” he added, somewhat assertively.

Clubs poised and trying to look as though we actually cared, we stood astride our respective burrows and waited for the first little twitching nose to emerge (and be well and truly allowed to escape I may add!).

After three or four minutes Rick called out again. “Any sign yet?” he asked. “No nothing,” we replied with much (relieved) shaking of heads. After a few more minutes there was still no movement.

“Can’t understand it,” shouted Rick. “He should have chased a few out by now.”

Just then I saw it. The first movement at one of the burrows. I watched fascinated as a little whiskered nose slowly hove into view. It was no rabbit.

Slowly emerging from the hole came the unmistakable head, followed by the long furry body of Freddie the ferret. Slowly he staggered out. A couple of feet from the hole he dropped down, stone dead! Well that was it wasn’t it? Rick rushed over and gathered up the little body. Crying and distraught, muttering that it ‘must have been a snake,’ Rick cuddled up what was apparently a family pet.

This tough denizen of the Australian outback was utterly inconsolable. From then on, the day was ruined. We only saw kangaroos from a distance of about a mile. Rick totally misjudged the time and subsequently we found ourselves stumbling through the snake and spider infested Australian outback by torch and starlight, in search of the car.

We drove back in complete silence and were dropped off at the hotel some 30 minutes before we were due on stage. The show did in fact go on. Lord knows how. But one thing was for sure. Kangaroos were off my bucket list, forever!