Playing with fire is a crackling tradition 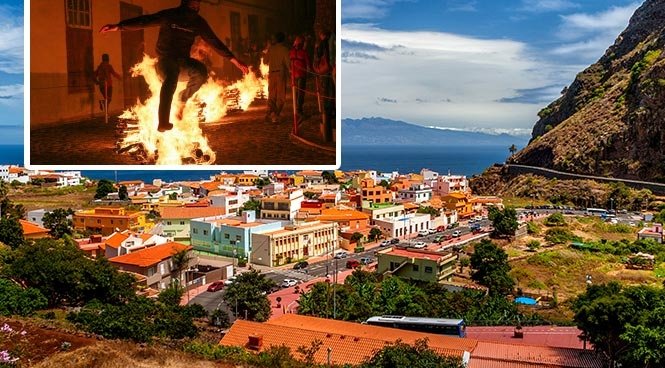 BLAZING SADDLES: The village of Agulo, with Tenerife in the background is among the few places where spring fire-jumping still happens

DOWN here on the small Canary Island of La Gomera, we’ve been selflessly risking life and limb again for the greater good, making sure lots of babies are born and crops prosper.

Every April 24, on St. Mark’s Eve: “The town fills with the smell of juniper wood bonfires, which are lit and leapt over by neighbours and visitors, either for fun, or in the hope of securing good luck for future ventures” (Island Cabildo).

For mysterious reasons, the ancient practice of spring fire-jumping has survived in Agulo, La Gomera, on this date. We don’t know why. Mark’s story in the gospels includes: a questionable martyrdom announced four centuries after his death; a lion; a connection with public notaries, of whom he is patron saint and no mention whatsoever of fire, or of jumping over it fuelled by vino del país on a small Atlantic island off the coast of Africa, though he was supposedly born in Africa.

The date of his feast day is probably the reason. Spring fire celebrations and rituals marking the end of dead winter and the start of the fertile year were once common. They symbolized the death of winter and ensured fertility and the return of the sun.

It’s likely that the locals were still jumping over spring fires in Agulo when the Catholic Church arrived, en route for the New World to save it from sin. Did priests troubled by the islanders’ refusal to stop this pagan fire-leaping nonsense sensibly absorb it into a St. Mark’s celebration to avoid conflict?

The only other surviving fire-jumping festival I know of is far away in Azerbaijan, where the Novruz Spring celebrations are still going strong, with bonfires in the streets. Azerbaijani adults, however, content themselves with dancing some lively pieces whilst their children do the leaping.

Hardcore Gomeros jump and dance lively pieces. As darkness falls and Mass finishes, there’s an explosion of sound. Bells clang, chacarra and tambor (Canarian castanets and drum) music vibrates, San Marcos gets paraded and youths held back at the top of the cobbled street start chanting “Fuego! Fuego!” straining for the off.

Bonfires are lit, flames leap, sparks fly…and away they go. This wonderful health and safety nightmare has an incredible atmosphere. Jeopardising important reproductive tackle, the participants leap through flames to ensure virility. When the fires are slightly lower, off go the young women, hair tied back (I proudly cheer my daughters on. Am I normal?).

Then the more cautious and elderly jump. Kids leap, too, with the tiniest on parents’ shoulders. Couples holding hands hop. They all jump down the line of fires, between smoky, ash-flecked spectators, then walk back up and do it again, and again, until the fires die down, the band strikes up and dancing starts.

As the bonfires cool, people collect ash for good luck and head home on the island’s winding roads, sooty, smelling of smoke and smiling.

It’s a great fiesta, all the better for its mixed origins. ¡Viva San Marcos!