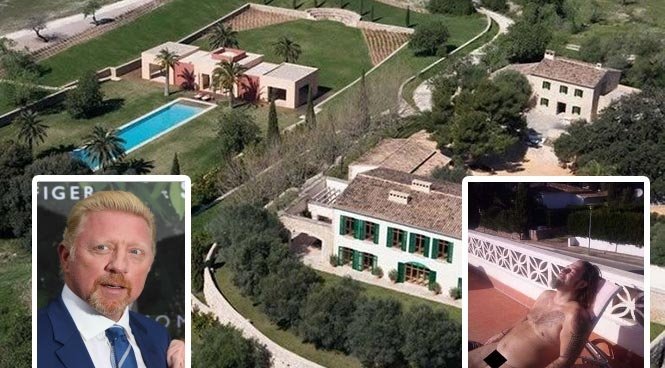 FAR OUT: Guru George Berres (inset right) says he’ll move off the estate if the police ask him to

Bearded free spirit George Berres, from Germany, says he plans to “save” the empty property near the rural village of Arta after pruning weeds and collecting litter with friends also thought to be staying there.

But the 44-year-old only discovered the identity of its owner after German media descended on the idyllic retreat last week.

The former carpenter told reporters that he would leave peacefully if the police asked him to.

Three-time Wimbledon champion ex-world number one Becker, 50, is believed to have “abandoned” the villa, called Son Coll, after being declared insolvent by a London court last year.

He owed a large sum of money to a private banking firm, and his request to pay the debt by remortgaging the 3,000 square metre Mallorca estate was knocked back.

The BBC pundit bought the mansion in 1995 and it briefly appeared on the market in 2007 before almost being auctioned off in 2012 when he forked out €400,000 to pay a local gardening company.

And in 2014 he reportedly managed to avoid it being sold off for a second time after he raised €470,000 to settle with a local building firm which sued him for unpaid maintenance work including carpentry, electricity, plumbing, and a new basketball court.

Bohemian Berres, who has lived on the island since 2014, has previously squatted in a number of empty houses and spent time in a caravan.

He said he has “big projects” in mind, adding that the residence “could be a place for meetings, we would like to plant vegetables, offer seminars about renewable energy and other things that interest people.”

Speaking to a local German paper, he earlier spoke of an organisation dubbed “Intergalactic Relief and Rescue Commando” which aims to occupy and regenerate empty properties.

“We do not occupy houses, we save them, we do not make claims to property, we are concerned with nothing other than to live in a rent-free home and give something back to the house,” he added.

And on Facebook he wrote in his mother tongue: “I am not real. I am everything and nothing. This has big advantages. Every day is different.”

A PayPal account he links to urges internet users to “send money to Jesus,” but the balance is currently zero.

Becker himself took to Twitter to deny owning the villa as he wrote: “Just to be clear: I don’t own any Finca on the beautiful island of Mallorca! Amused by the “story” myself.”

But the German legend is thought to retain the deeds via a third party, according to reports.