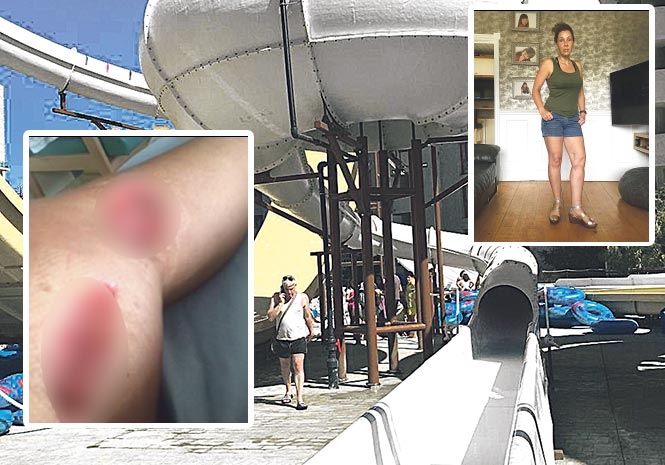 ‘I WAS HYSTERICAL’: Doctors told Helen she could lose her leg or even die.

A BRITISH mum who almost lost her leg after a waterslide accident saw the limb infected with flesh-eating bugs is suing a Benidorm hotel.

Helen Priestly, 42, cut her leg in two places and was twice forced to have surgery.

And the mother-of-one from Rochdale, Greater Manchester, has filed charges against the hotel for its ‘death trap’ chute as she battles to get it shut down.

She said: “The slide I was on is a potential death trap. It’s only a matter of time before an adult or child is seriously injured on it.”

The incident came after she forked out more than €950 on a four-star break in the Costa Blanca resort with husband Leon, 40, and 15-year-old daughter Danielle.

Helen rode on the slide without knowing that someone had broken their leg on it earlier the same day.

She explained: “I didn’t stand a chance really as the gap to go through wasn’t really big enough to get through.

“The water current was really strong and it slammed me into the opening. I was in agony.”

After fighting against the flow to get off the attraction she realised how badly she was hurt.

“I started nearly passing out from the shock and blood loss. I had a big massive hole in my leg like an indent,” she added.

An ambulance took her to a private hospital where medics x-rayed the leg and put her on an IV drip before letting her go.

The hotel refused to cover the cost of a wheelchair, leaving the family to pay, and they were not visited by a rep for two days.

She continued: “I was in constant pain but they wouldn’t help us at all from then on. I was in intense pain and couldn’t wait to get home.”

But things took a turn for the worse six weeks after they arrived home, when she was admitted to the Rochdale Infirmary in massive pain before being diagnosed with necrotising fasciitis, commonly known as flesh-eating disease.

She said: “A cloudy, milky liquid was pouring out of my leg, it was disgusting.

“One time I woke up and my bed was soaking from all the liquid and it was so bad the nurse thought I had spilled a glass of water on the sheets.

“But as the poisons were gone I felt a bit better.”

Doctors then performed two emergency operations in a bid to save the leg after a transfer to Royal Oldham Hospital, where she was admitted to the high dependency unit.

She added: “I actually felt better and had a cup of tea. But then the doctors looked at my leg and said I might lose my leg and told my husband and daughter I could also die.

“I was hysterical I couldn’t believe all this had come from a water slide. It was like something out of a horror film.

“There were massive holes and gaping wounds in my legs and you could see the bone.”

An official from travel operator Jet2 said: “The health and safety of our customers is extremely important to us, we are exploring Helen’s claim fully.

“As this is part of an ongoing legal process, we are unable to comment further at this time.”