Brit killed by drunk driver in Magaluf was 'almost on all fours' as he crossed road, inquest hears 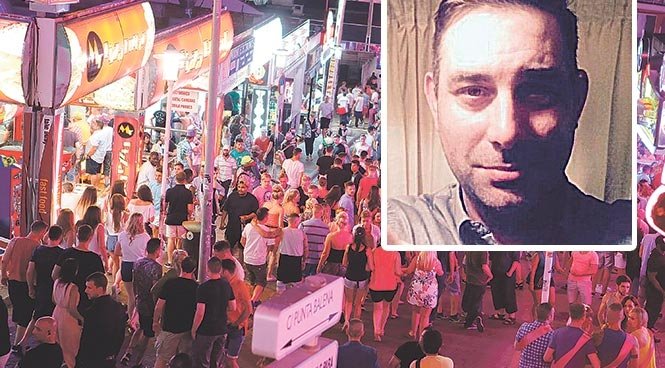 HOLIDAY HORROR: The family of Adrian O’Kane (inset) have demanded justice in the wake of an inquest into his death.

A BRITISH dad killed on a Magaluf stag weekend had taken cocaine before being mowed down by a speeding drink driver.

Adrian O’Kane of Acocks Green, Birmingham, died after being hit by a car as he walked towards his hotel.

And an inquest has heard that the 40-year-old construction worker was so intoxicated that he was in a ‘semi-standing position, almost on all fours’ as he tried to cross Carrer Pinada in the early hours of April 23 last year.

A post mortem examination confirmed that the victim suffered a severe head injury during the collision with a dark-coloured Ford Focus driving ‘at excessive speed.’

Witnesses said they heard the car “skidding” along the Punta Ballena party strip before it turned onto Carrer Pinada.

The man at the wheel, a 39-year-old Spaniard, was held on suspicion of involuntary murder and driving under the influence after testing positive for alcohol and cocaine, Birmingham Coroner’s Court heard.

Mr O’Kane had a high level of alcohol and 0.22 grammes of cocaine in his bloodstream before the accident.

Senior coroner Louise Hunt read out a toxicology report which said: “The subject had ingested large amounts of alcohol, 2.86 grams per litre, together with the consumption of cocaine immediately prior to the accident.

“The consumption of toxic substances around the time of his death was therefore very likely to have contributed to the accident.”

Known as Swanny to his friends, the victim leaves behind two daughters, aged 12 and 10.

His body was flown back to the UK after his family raised more than €34,000 from donations in less than a fortnight.

In the wake of the hearing Adrian’s mum Mary said: “Everyone loved Adrian and we’ve been overwhelmed with support from family and friends.

“He will be greatly missed and he would have been touched by the impact he has had on so many people.

“We now want to see justice against the driver as it’s just horrible to think that someone taking drugs and drinking while driving has taken Adrian away from us.”