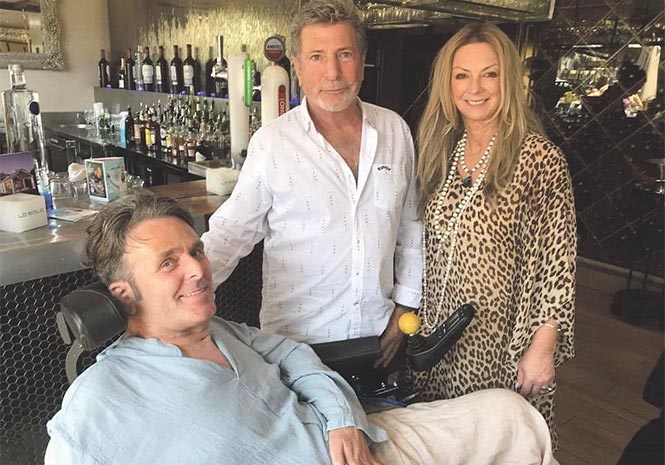 The event took place at La Sala Banus in their Live Lounge and boasted a celebrity line-up, including music by Albie Davies, who was a finalist in last year’s Germany’s Got Talent.

All proceeds from the day went towards a €24,000 target to buy David a new electric  wheelchair which he desperately needs to improve his quality of life and facilitate his mobility.

The event was organised by Holly Millard from Elite Events. Speaking exclusively to the Euro Weekly News about the day she said, “it was a great success. In particular I would like to thank the Chairman of La Sala, Ian Radford, for generously donating gift vouchers, the signed football memorabilia and 30 per cent of the ticket price to David’s fund.”

Other generous donations included a diamond necklace from Anthony’s Diamonds, gift vouchers from Hotel El Oceano and Nobu Hotel, flower arrangements from Deseos Florist and Love Bracelets from Julie Miles. This fundraising campaign is very close to Holly’s heart as David has been a family friend for many years. Working as the photographer at her family’s weddings, birthdays and other big events.

But it is not just David’s photos which are stunning. He has a personality to match and this is why so many of his friends, family, colleagues, clients and fellow photographers were devastated by the news of his accident two years ago and fully support his campaign.

David was left paralysed after a motorbike accident in July 2016. The freak accident left him as a quadriplegic with major neurological damage to the body. It is still unclear just how much movement and independence David will regain.

There are many costs associated with David’s injuries and he needs help towards his long-term care and rehabilitation.  With just over €3500 received, there is still much to do!.

Over his personal and professional career, David has given so much to the community. This is now an opportunity for the community to give something back.

You can donate to David’s campaign by visiting www.gofundme.com/2s7mrahs.

For more information you can also visit his Facebook page (@davidtomsprofessionalphotography).

Keep an eye out for future fundraising events to help David reach his goal.