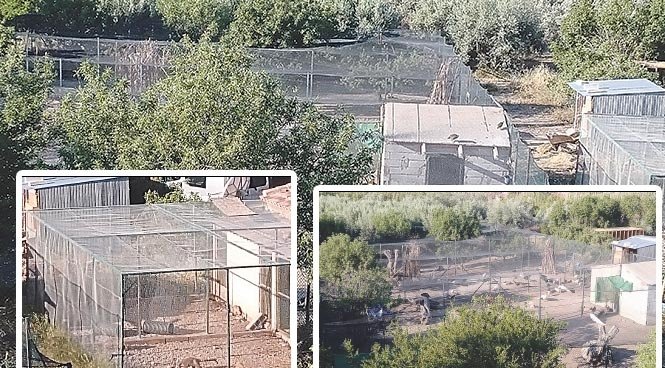 A BRITISH homeowner has spoken of his outrage after an expatriate neighbour’s ‘illegal zoo’ made his life in Almeria impossible.

Former Land Rover project manager David Dibble, 60, bought a house in El Chopo, Arboleas with wife Mandy 15 years ago, and the couple have since spent around six months per year there.

But five years ago the British owners of the adjoining property sold to a German man, who cannot be named for legal reasons, and it was then that the problems started for the pair from Lichfield, Staffordshire.

“It’s horrendous, we can’t sunbathe out back and we can’t hang our washing out at the front due to the putrid smell,” explained David, speaking exclusively with Euro Weekly News.

“The noise is terrible, we are often woken in the middle of the night, and the place is infested by rats which run through our garden chased by stray cats attracted by the food.”

I have had two heart attacks in the past and the stress is causing me to feel very unwell.

“He started building pens just after moving in, normally on a Friday afternoon when the local council is shut, and he’s just put up a new 30-square metre one.”

David continued: “They are now just a metre from my garden and he’s turned the property into an absolute sewage farm.

“He has loads of peacocks and other birds, but I don’t know how they survive.

“He also has nose bears [a member of the raccoon family also known as coati], wallabies, miniature deer and servals [an African wild cat], although one of them escaped and they couldn’t find it.”

At one point he even had a southern cassowary [a large flightless bird from Indonesia, New Guinea and Australia] and a black panther!

“And he’s got meerkats indoors.”

SEPRONA, the Guardia Civil’s nature protection arm and the town council have reportedly confirmed that the owner of the animals does not have the correct licences, and legal documents for closure of the facility agreed by the council in 2013 after 30 households complained have been seen by the Euro Weekly News.

But they were not signed by the mayor.

“I have written to the authorities but they have not been getting back to me,” added David. “It’s been going on for five years but they say it is too expensive to remove the animals and there is nowhere to put them.

“The noise pollution, lack of pest control, contamination and illegal construction have all been disregarded by Arboleas Council.

“We just want someone to help us.”

Arboleas Council has not responded to a comment request.