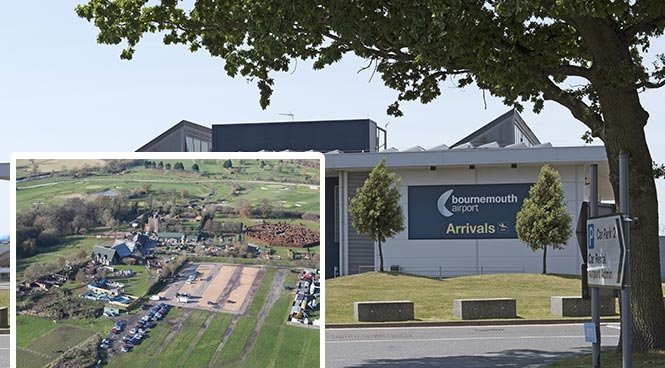 PARKING MAD: Some travellers were unable to find their keys after BOMO Parking Services (inset) folded

HOLIDAYMAKERS were left furious after they returned to the UK from Spain to find that a car parking company had gone bust while they were away.

The baffled travellers were told that security staff would escort them to their vehicles after landing at Bournemouth Airport.

A member of staff from BOMO Parking Services reportedly fled after dumping a sports bag with around 300 car keys inside at an information desk.

The firm had previously traded under the slogan: “Don’t worry we’ll look after your motor while you’re away.”

Lisa Russell from nearby Southampton was unable to find her key after flying back from the Costa del Sol with husband Michael and two friends.

She told UK media: “We have had no warning and no message from the company explaining what’s happened,’ she said. ‘We used them once before and had absolutely no problem and even when we were leaving they were very friendly – there was no worry about anything going wrong.

“But to come back and find that your keys have been lost and you can’t get home is really upsetting.

“It’s just such a shame that we’ve had a wonderful holiday and then this happens as soon as we come back.

“The airport staff have been really helpful, it’s not their fault in the slightest that this has happened.”

John Appleby had been in Mallorca for a week, and explained: “I got an email yesterday basically telling me that the company had ceased trading thanks to an individual who was known to them.

“I was really surprised really as previously there had been no indication that anything was wrong.

“We used the same firm last year and everything ran smoothly so for this to happen is really surprising.”

Mum-of-two Katie Weymes, 33, had also been on the island for a family break with husband Peter and sons Dylan, four, and Finlay, two.

She said: “This is the first time we used BOMO and it is frustrating.

“We were in the taxi on our way to the airport when we found out they had folded and it doesn’t really help the stress of travelling with two young children.

“In fairness to the airport they’ve been really helpful and took my husband to pick the car up in a 4×4.”

BOMO said in a statement that it had folded after a “sustained attack online and offline” by an unnamed individual had a “catastrophic effect.”

It continued: “All vehicle keys have been hand delivered to Bournemouth Airport information desk for customers to collect on their return from holiday.”

It comes after vandals last month caused thousands of pounds worth of damage to cars and security cameras parked at the company’s premises, with Dorset police probing the incident.