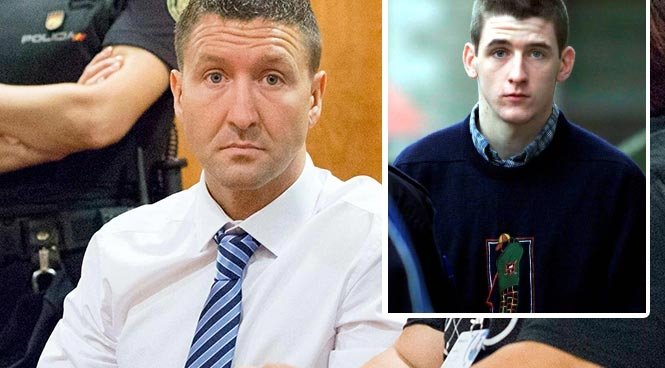 GANGLAND EXECUTION: James Quinn intends to appeal his conviction for the murder of Gary Hutch (inset)

AN IRISH getaway driver has been jailed for 22 years over his role in a gangland execution.

James Quinn, 35, received the sentence after being found guilty of taking part in the murder of 34-year-old drug lord Gary Hutch at a gated community in Miraflores, near Fuengirola.

It comes after state prosecutors demanded a 25-year prison term for the killing plus three years for an illegal weapons rap.

But judge Ernesto Carlos Manzano ruled in a 15-page document he will instead serve 20 years for the September 2015 execution since he was not the assassin and previously had a clean record in Spain.

The father-of-one was initially accused of donning a balaclava and lying in wait for more than two hours before shooting the victim 15 times during a chase around a swimming pool, including twice in the head at point-blank range.

The jury forewoman said that while they were unable to conclude Quinn was the shooter, a baseball cap with his DNA on it found in a BMW X3 stolen from Mijas and later found torched near Marbella proved him to be a “necessary participant” in the hit.

And the nine-person jury ruled unanimously that he took part in the brutal attack after Jose Barba, prosecuting, offered a last-minute ‘option B’ indictment that he could have acted as a lookout and getaway driver.

In his ruling the judge said Quinn must cover the court costs and pay the victim’s relatives €90,000 in compensation, describing the murder as “execrable.”

He added: “Other circumstances need to be taken into account in terms of the crime and the man convicted of it such as the fact he had no previous convictions in Spain and he has not been convicted as the direct material author of the crime.”

Defence lawyer Pedro Apalategui is expected to appeal the sentence after he earlier said: “We completely disagree with the verdict and will definitely be appealing once we know the sentence.”

Quinn was arrested in September 2016 when his DNA was found on one of two caps recovered from the burned out car after undercover detectives snatched a bottle of water he drank from on a high-speed train while he was under surveillance.

He had earlier in the trial broken a two-year silence to insist that he was lying hung-over in bed with a prostitute when the assassination took place.

The brutal hit on September 24 2015 triggered a feud between rival crime families that has claimed at least 15 lives in Ireland and Spain.