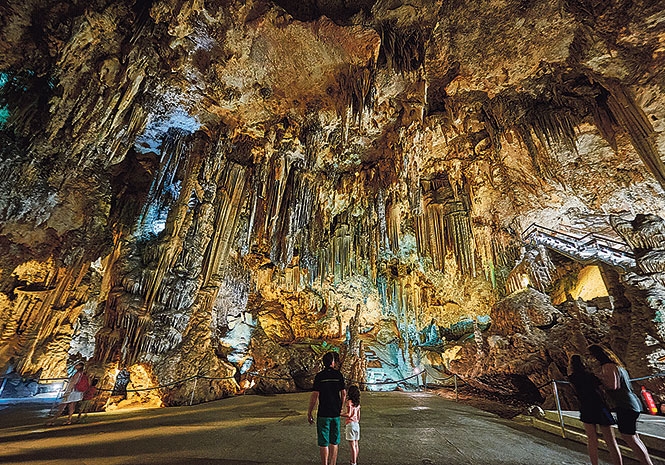 CAVE RAVE: Concerts are sometimes put on in the popular attraction.

FOLLOWING its recognition as Spain’s best emerging travel destination, Nerja is likely to see waves of extra tourists flock to its idyllic beaches this summer.

The coastal Axarquia destination was ranked fourth in TripAdvisor’s ‘Top Destinations on the Rise – Europe 2018.’

And the town also finished ninth worldwide in the website’s Travellers’ Choice rankings.

With the awards reportedly judged on the increases in positive reviews, searches and booking interests, they merely demonstrate the growth of the town’s appeal, not how wonderful a destination it is.

Nerja is moving from niche to mainstream, in other words.

What is undoubtedly mainstream, is the town’s beaches. Much like the rest of the Spanish south coast, sandy beaches and sun make for a winning combination.

But there is more to the town than beaches.

Situated about 50km east of Malaga, Nerja has Muslim roots – indeed, its name is thought to stem from what the previous rulers called it: ‘Narixa,’ which means ‘abundant source.’

But its history stretches far further back. Primitive paintings, discovered in 2012, line the walls of one of its best attractions – the spectacular Caves of Nerja. The find was significant as it is thought to be the first Neanderthal cave paintings discovered in the country.

The caves themselves boast impressive stalactites and stalagmites and interesting historical displays. The near 5km caverns are divided into two main parts, though one is not open to visitors.

Occasionally, concerts are put on for the public, and – given the stunning setting and amphitheatre dynamics – it is not a spectacle to be missed.

Another attraction for non-beach fanatics is the Balcon de Europa, which provides spectacular views of the coast and a pretty spot for a stroll. At night, street artists give the pedestrianised area a lively atmosphere. The sunsets can also be stunning.

During the day, a walk up the riverbed of the River Chillar can make for a refreshing day trip.

Pretty geology, a lack of crowds, crisp water and greenery make it a winner with most who are willing to try it. And revellers also have time for a quick dip in the river’s waterfalls.

Noting the array of attractions near the destination, TripAdvisor write: ‘Positioned at the eastern tip of the Costa del Sol, Nerja boasts nearly 10 miles of powdery beaches featuring activities like water skiing, scuba diving and sailing. Although tourist-oriented, it hasn’t been overtaken by high-rises, and its huge promenade delivers panoramic Mediterranean views.’

In 2009, the 33-square- mile community had a reported total population of 22,000. The town’s permanent residents retain some Spanish authenticity in the town itself, according to some visitors.

Even if the TripAdvisor gang do arrive in their droves, Nerja is likely to retain its charm for years to come, especially away from the beaches. Let’s just hope is does not rise too high in the tourist destination stakes.