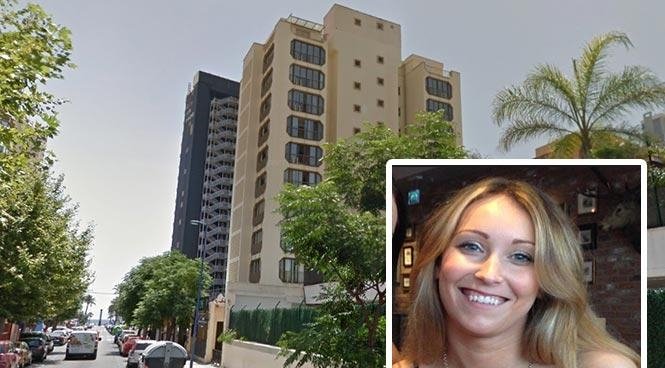 FRESH HOPE: BBC Scotland is to feature the probe headed by David Swindle.

AN INVESTIGATOR who recreated the death of tragic Scottish holidaymaker Kirsty Maxwell for a television documentary says she “climbed out on a balcony in Benidorm before losing her grip and falling.”

Specialist Michael Brown performed a series of tests during which he asked three women of a similar height and weight to the victim to climb a replica of the hotel railing she fell from.

And his probe found that the 27-year-old from Livingston did not jump from the tenth floor balcony, but climbed over it and tried to cling on before plummeting to her death.

Mr Brown said: ““All we can say is I believe she was facing into the room at the point she lost her balance or lost her grip and fell, vertically initially, before she interacted with features on the building.

“How that loss of balance or loss of grip occurred is not something I can hypothesise on.

“But the biggest thing that would help is if people actually spoke up.”

In the dramatic reconstruction, the woman wore similar clothes to those Kirsty had on when she died, and each took 12 seconds to climb over the railing.

Tears on her denim skirt were also analysed,

Private detective David Swindle, an ex-police officer who has been leading an enquiry on behalf of her family, says in the BBC show Killed Abroad: “Kirsty could not have jumped directly over that balcony.

“It seems far more likely that she clambered over.

“But what happened next? It makes me wonder – has Kirsty been climbing?

“Was she trying to get to the rooms below?

“It wasn’t very quick. What were they (the suspects) doing when this was going on. We saw how difficult it is to do what was said that Kirsty did.

“It’s a small piece in the jigsaw of circumstances that you try to put together. It helps the investigation.”

He added: “Nobody tested that theory. The police in Spain hadn’t used any experts. We will hand the information over to the authorities.”

Kirsty was on a hen-do with pals and died seven months after marrying husband Adam in Cyprus.

After a night out she entered and fell from an apartment next door to a friend’s room, and a floor above her own, occupied by five British bodybuilders from Nottingham.

The men were quizzed by Spanish investigators and denied responsibility for her death, claiming she jumped before returning to the UK.

Mr Swindle has obtained police images from inside their room, alongside copies of their statements, in which major holes were found during the programme.

Spanish investigators believe Kirsty could have mistaken the apartment for a friend after becoming disorientated, and controversially destroyed her clothes without proper DNA testing.

Her dad Brian Curry, 59, has urged any witnesses to come forward as the family fight to keep the case open.

He said: “We hope this will put pressure on the authorities to take this to trial. We are waiting for scientific results back from the lab and a prosecutor will look at the evidence.

“We want somebody to be held responsible. To me, one or more people are responsible for Kirsty’s death.”

Killed Abroad, which also investigates the death of Craig Mallon, 26, who was killed with one punch while on a stag party in Lloret de Mar, was due to be aired on BBC1 Scotland at 9pm last Wednesday but has been rescheduled and will be broadcast at the first available opportunity.

If you have any information about the accident on April 29 2017 email [email protected].

The Kirsty Maxwell Information Appeal has also released a poster featuring a series of appeal points, as below.