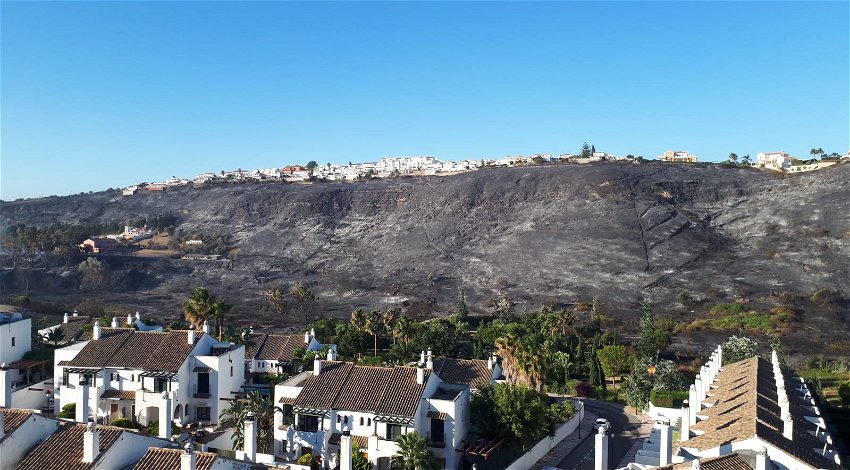 DRAMATIC SEQUENCE: The fire burned 54 hectares of land before an off-road vehicle was pulled from the sea

INVESTIGATORS suspect a wildfire that saw 400 people evacuated from their homes in Manilva was started by drug traffickers.

It comes after a stolen off-road vehicle was pulled from the sea on a nearby beach the next morning, sparking suspicions the blaze could have been a diversion allowing smugglers to bring large quantities of hashish ashore.

Could the blaze have been started by drug gangs?  Credit: INFOCA

Police also received calls from residents who saw other vehicles driving off the beach at high speed while the fire was raging.

A probe was launched in the wake of the blaze, which broke out around 1.30am on Sunday as the town’s Santa Ana feria celebrations drew to a close with a firework display.

It was brought under control just under seven hours later after strong winds complicated firefighters’ efforts, with hundreds of residents told to leave their homes as the flames advanced.

Many took shelter in the municipal leisure centre overnight, with a section of the A-7 motorway also closed to traffic.

Initial rumours suggesting a firework could have been to blame, but it was found that it started around four kilometres away, with a rucksack and the remains of a sandwich recovered from the scene near the Los Hidalgo, Princess Kristina.

He added that the vehicle on the beach had been completely submerged and its rear seats were missing, suggesting it had been modified to carry drugs shipments.

The submerged vehicle was pulled from the sea.   Credit: Twittter

But Junta de Andalucia environment minister Jose Fiscal said in a statement that several lines of enquiry remain open and insisted “it is not confirmed” that traffickers started the fire.

He added that bicycle tracks were also found in the area which is “frequented by people at night” who “sometimes light bonfires or have been smoking drugs.”

In the days following the incident more than 6.4 tonnes of hashish has been seized during two raids in La Linea de la Concepcion and Campo de Gibraltar, but it has not been confirmed if the swoops are linked.