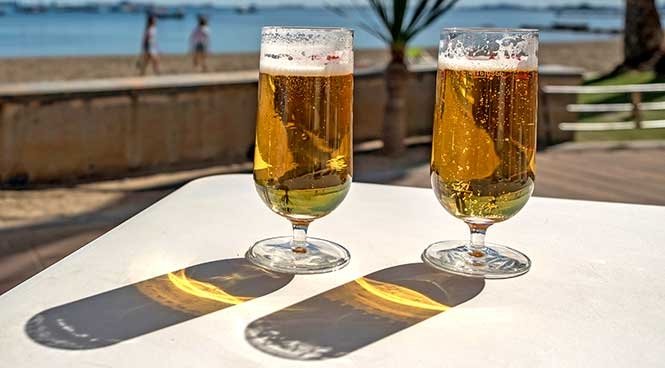 BRIT holidaymakers heading abroad are ditching the traditional phrasebook and are more likely to pick up their phones to translate the local lingo, a new poll reveals.

Getting a round in seems to be a priority for UK holidaymakers with the survey showing that on their most recent holiday abroad 28% of Brits learnt how to order drinks in the local language.

Brits also seem to live up to their polite stereotype, with 72 per cent of UK holidaymakers learning how to say ‘please’ and ‘thank you’ on their last holiday, topping ‘hello’ and ‘goodbye’ on 69 per cent.

However, over 60 per cent of 16 to 34 year-olds say they’ve used their smartphones and apps like Google Translate to help understand the local language, with just 39 per cent opting for a phrasebook.

But relying on technology brings its own perils – with more than one in five (21 per cent) of 16 to 34 year-olds reporting that an inaccurate translation on their phone has led to misunderstandings while on holiday.

Among the 2,000 UK adults surveyed for the British Council poll, across all age groups the majority (73 per cent) recognise the importance of learning a few foreign phrases when heading off on holiday.

However, 65 per cent still rely on locals being able to speak English and 21 per cent did not learn any foreign phrases at all for their most recent trip abroad – not even basic pleasantries such as ‘please’ and ‘thank you’. 29 per cent say they avoid going to a restaurant if the menu is not in English.

Vicky Gough, Schools Adviser at the British Council, said: “It’s fantastic that so many of us are ready to give foreign languages a go to make the most of our holidays, and smartphone technology can be a great first step in getting directions and finding out basic information.

“However, this technology has its limits and can’t replicate the linguistic and cultural nuances of human conversation. In fact, as our survey shows, it can potentially lead to a whole new level of confusion with phrases lost in translation.

“Ultimately, nobody wants to be stuck staring at their phone screen all holiday, so taking the time to learn a few phrases can pay dividends – not just for a couple of weeks in the summer but in the workplace too.

“As the UK repositions itself on the world stage, more of us being able to speak a little of another language will be key to the country’s long–term competitiveness. With employers crying out for more language skills we need to give language learning the prominence it deserves. Trying out just a few words or phrases on holiday and encouraging your children to practice their language skills this summer is the perfect place to start.”

The research, carried out by Populus, was commissioned by the British Council – the UK’s international organisation for cultural relations and educational opportunities – as part of its work to build relationships for the UK around the world through language, culture and education.

Past research has shown that the UK has a shortage of people able to speak Spanish, Mandarin Chinese, French, Arabic and German, identified as the five most important foreign languages for the UK’s future prosperity and global standing post-Brexit.