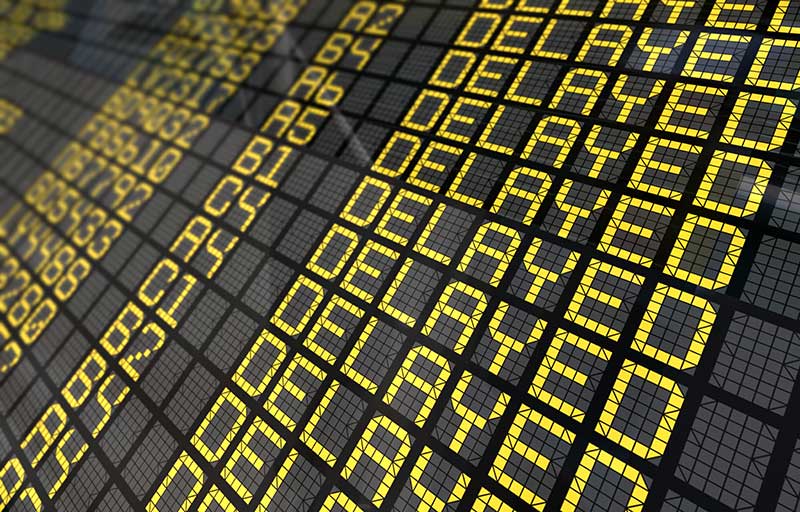 DELAYED: Airlines claim they are flying slower to save on fuel consumption. Photo credit: Shutterstock

FLIGHT times from the UK are on average 35 minutes longer than a decade ago, despite improvements in aircraft technology a Which? Travel report claims.
The consumer group report claims that airlines are “padding” their schedules to create an impression that flights are arriving on time.
The Which? Travel investigation found that flight times today are actually slower than they were in 2009 – and it claims it’s the airlines fiddling with flight times to avoid compensation payouts.
Researchers examined average flight times for 125 routes operated by large airlines in 2009 and compared them with last year.
They found that of 76 routes, 61%, now state they take longer; with 87% of British Airways flights analysed found to be slower with 82% for Ryanair, 75% for Virgin Atlantic and 62% for easyJet.
The consumer website said firms are deliberately adding on extra time to make it appear as though they are arriving on schedule and to give them leeway to ‘catch up in the air’ if they’re running late.
“Passengers are likely to feel that schedule padding is another case of airlines pulling the wool over their eyes,” said Rory Boland, at Which? Travel.
“Carriers are quick to claim that adding 10, 20 and even 30 minutes to flights will improve on-time performance. The accompanying slump in punctuality over recent years suggests it hasn’t helped much.
“Instead, longer scheduled flight times are likely to mean passengers spend more time sitting around at the gate or on the plane itself, just so the airline can pat itself on the back for being ‘on time’ at your destination.
“Conveniently, it could also reduce the number of instances when an airline has to pay you compensation for a flight delay.”
In response, airlines said they were flying at slower speeds to reduce fuel consumption and that this allowed them to offer cheaper fares. BA also told Which? that air traffic control congestion was a factor, with European skies now much busier than 10 years ago.
Virgin Atlantic said: “There are many reasons why schedules may vary, for example, congestion at airports, more economical flying regimes, stronger jet streams or different aircraft types.”
Easyjet said in a statement: “Our data shows Easyjet’s network punctuality was at 80 per cent for 2017. Only 0.8 per cent of our flights are delayed by more than three hours and we will always pay compensation when it is due.”